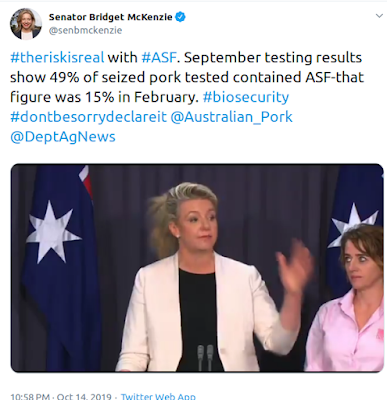 While it doesn't tend to make daily headlines, much of the world is dealing with one of the most expensive epizootics in history.  African Swine Fever (ASF) has wiped out - at least by some estimates - as much as a quarter of the world's pig production.


And this aporkalypse shows no signs of slowing.

While the full extent of the damage has been deliberately obscured by China and North Korea, a recent Rabobank report (“African Swine Fever: A Global Update.”) - published August 22nd - has revised their estimates of China's losses to 50% - or over 200 million head.

While the disease can be carried by infected wild boar - and may cross borders undetected - for countries protected by oceans, the most likely way it will arrive is hidden in the luggage of a traveler coming from an endemic region.

Despite its illegality, and the risks of transporting dangerous diseases, thousands of people try to carry prohibited food products - and sometimes even live birds -  through ports of entry every day (see Vienna: 5 Smuggled Birds Now Reported Positive For H5N1).

In 2014's `Carrion’ Luggage & Other Ways To Import Exotic Diseases we looked at the exotic bush meat trade from Africa, while more recently we've been focused on the smuggling of ASF tainted pork (see Taiwan Expands ASF Luggage Checks). 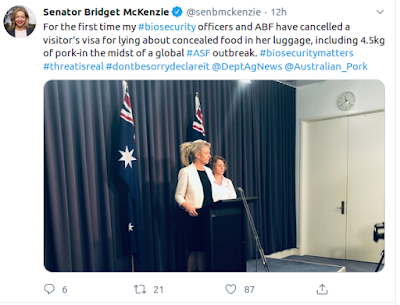 She also announced that agents of the Australian Border Force have confiscated 27 tons of cooked pork products this year, and that in the most recent month, 49% of the items tested were positive for the ASF virus.


This is the highest percentage announced by any country I've seen to date, and speaks to how pervasive the virus has become in the food supply, primarily in Asia.


While ASF doesn't affect human health directly, the entry of this virus into currently exempt countries like Australia, Japan, Taiwan, Canada, or the United States could be economically devastating, and further increase food insecurity around the globe.

Stay tuned.  This story is only likely to grow over time.