After 440 cases were confirmed during the first 12 months - and more than a million birds culled - only 4 cases would be reported between June 1st and November 15th of 2019.

Newcastle disease only poses a minor threat to human health - on rate occasions causing mild flu-like symptoms and/or conjunctivitis -  but it can be up to 100% fatal in poultry, and remains a serious threat to poultry interests world wide.

The hard fought campaign against Newcastle in Southern California appeared to be be won until six weeks ago, when - after more than 2 months without a case -  5 new outbreaks were reported in the second half of November.  This has been followed by 14 new outbreaks in December (see chart below). 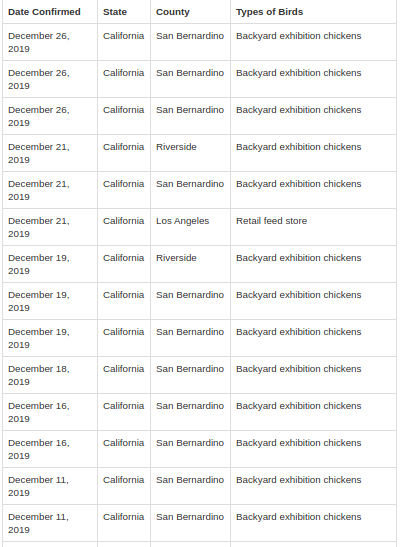 A week ago, the CDFA released the the following statement on this sudden reversal.

Virulent Newcastle Disease Update from State Veterinarian Dr. Annette Jones
Over the past month, Virulent Newcastle disease cases have increased because people have violated the CDFA VND Regional Quarantine by moving infected birds or contaminated equipment and secondary spread to neighboring flocks. We now have 20 new cases under investigation, all linked to the recent Bloomington area outbreak. Most of the cases are in San Bernardino County, with two in Riverside County and one in Los Angeles County. Backyard flocks as well as retail pet/feed stores are involved.

Based on phylogenetic analysis and epidemiologic studies, we understand how the disease spreads in Southern California. This highly contagious virus has been spread when people move exposed birds or equipment, or when people carry the virus to their own unfortunate flock on their hands and feet. It moves long distances as people illegally move birds or equipment. When introduced to a new area, it is amplified as the previously uninfected poultry succumb until the environmental virus load is so great, the outbreak spreads from yard to yard. Exposed poultry around a newly infected flock are the “virus amplifiers,” particularly just before they show signs of disease.

Put simply, your birds can spread the disease before they show symptoms, so the only way to stop it is to not move birds – period – if you are in the CDFA Regional Quarantine Area.

As a reminder, last year the disease was spread from San Bernardino to LA and Riverside counties and beyond, leading to widespread highly infected areas, infected poultry farms, the death of over 1.2 million birds, and significant financial and emotional strain on poultry owners and disease control agencies.

We need your help to stop the spread of this virus and end this outbreak. Specific actions you can take to protect the poultry in your community are on the CDFA VND website in our biosecurity videos, guidance documents and links, but general keys to success include:

Please work together to ensure we do not see this outbreak grow as it did in 2018. Stopping the spread will take the combined effort of all bird owners. Talk to your neighbors and friends. Keep Southern California safe for poultry!


Just as with epidemic diseases in humans, the risks of seeing foreign animal diseases imported into this country continue to rise as international travel, and trade, increases.


While most of these diseases don't directly impact human health, some of them - like avian influenza, Anthrax, Brucellosis, Japanese encephalitis, Crimean Congo hemorrhagic fever, and Rift Valley Fever - can pose a threat to public health.

For a long (and growing) list of notifiable animal diseases, you may wish to peruse the USDA's Notifiable Diseases and Conditions webpage.
Posted by Michael Coston at 7:53 AM