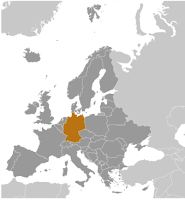 
Less than 12 hours ago we learned of Germany's first locally acquired coronavirus case linked to contact with a colleague visiting from China, and in the past hour or so, the Bavarian Ministry of Health  has confirmed that three other employees at the same company have tested positive.

Three more coronavirus cases in Bavaria - connection with the first case - Bavaria's Minister of Health Huml: around 40 people should be tested on Wednesday as a precaution

The Bavarian Ministry of Health was informed on Tuesday evening that three other people in Bavaria had been infected with the novel corona virus. These patients are also employees of the company from the district of Starnberg, where the first person affected is already employed. This man had apparently contracted a Chinese colleague during a training session on January 21. This colleague flew back to China on January 23. On January 27, the company informed the health department of the Chinese woman's illness.

It was decided that the three new patients should also be admitted to the Munich Clinic Schwabing, where they would be medically monitored and isolated. A few other contact persons are currently testing whether they are infected with the corona virus. The Bavarian Ministry of Health and the State Office for Health and Food Safety (LGL) will report on details in a press release on Wednesday.

Bavaria's Minister of Health Melanie Huml emphasized on Tuesday evening in Munich: "A total of around 40 employees of the company were identified who could be considered as close contacts. Those affected should be tested on Wednesday as a precautionary measure. They will also be examined by the LGL's 'Task Force Infectiology' questioned in detail. "

Posted by Michael Coston at 5:24 PM