Friday's announcement by the CDC that they would start the Screening Of Air Passengers arriving from Wuhan City At 3 Airports (SFO, LAX, JFK) has garnered a lot of media attention - and while screening may yield some positive results - its ability to keep any infectious disease out of the country is marginal at best.

Public health officials know this and openly admit it, although the public often comes away with  different expectations.  In Friday's press release, the CDC clearly stated:


Entry screening alone is not a guarantee against the possible importation of this new virus but is an important public health tool during periods of uncertainty and part of a multilayered government response strategy. As new information emerges, CDC will reassess entry screening measures and could scale activities up or down accordingly.

What screening can do is give public health authorities some idea of how many potentially infected people are arriving each day or week - and whether those numbers are increasing or decreasing. It can provide clues where localized outbreaks are most likely to occur, and when it  does detect symptomatic cases, it can expedite early treatment for them and any close contacts.

And as an added bonus, it may help slow the entry and spread of the virus.  But it is a short term measure, and if an epidemic is spreading globally, will quickly lose its value.

There are also some other, less tangible benefits of airport screening, as it may help discourage  symptomatic people from traveling, raise awareness among travelers, and educate them as to what they should do if they fall ill after arriving.

Three months ago, in The WHO Pandemic Influenza NPI Guidance : Travel Measures - which is feeling increasingly timely - we looked at their recommendations on the Entry and Exit Screening of travelers during an influenza epidemic of pandemic.


While highly disruptive, and generally ineffective (see Why Airport Screening Can’t Stop MERS, Ebola or Avian Flu) it is often the first - and most visible - response by governments anxious to show they are `doing something' to protect the populace.

Ten articles related to entry and exit screening were included in this review (185, 220-228). Observational studies conducted at airports estimated that the sensitivity of entry screening was low (226-228). Among arriving international travellers, half of the influenza cases were identified more than a day after arrival (through passive case finding and contact tracing in the community), although 37% of the influenza cases were screened while passing through the border entry site (185). Simulation studies estimated that screening international travellers may help to delay the epidemic by less than 2 weeks (0–12 days) (220-222).

This is familiar ground which we've trod many times before.

In 2010, in Japan: Quarantine At Ports Ineffective Against Pandemic Flu, I wrote about a study that found between asymptomatic or mild H1N1 infections, and a silent incubation period of several days, there wasn’t much chance of long-term success.


For every person identified, and quarantined, by port authorities - researchers estimate 14 others infected by the virus entered undetected.

In April of 2012, in EID Journal: Airport Screening For Pandemic Flu In New Zealand, we looked at a study that found that the screening methods used at New Zealand’s airport were inadequate to slow the entry of the 2009 pandemic flu into their country, detecting less than 6% of those infected.

Based on the available evidence, the WHO's general recommendation is against Entry and Exit Screening, although that is unlikely to deter a lot of nations from trying it.

The 3 airport (SFO, LAX, JFK) screening program announced on Friday is only for direct or indirect  flights from Wuhan China, and as soon as enough cases are identified in other Chinese cities, or outside of the mainland, the feasibility and benefits of screening will plummet.

Ultimately, the spread and impact of 2019-nCoV will hinge in large part on its transmissibility - and that is measured by its R or R0 (pronounced R-naught) - aka, its basic reproduction number - the number of new cases in a susceptible population likely to arise from a single infection. 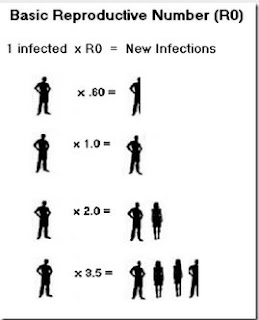 With an R0 below 1.0, a virus (as an outbreak) begins to sputter and dies out.

Calculating the R0 is notoriously difficult, even years after an epidemic has passed. Much hinges upon the existence and subtle differences between viral strains, the accuracy of surveillance and reporting, `seasonality’, and individual host responses to the virus (i.e. number of `super spreaders’).

2017's Study: A Pandemic Risk Assessment Of MERS-CoV In Saudi Arabia, found that MERS possessed a sub-critical R0 (R: 0.85–0.97) across all regions, although during the study period the central and western regions flirted with epidemic level R0 (R: 1.08–1.12) numbers.

Where 2019-nCoV goes from here will depend largely on whether its R0 is closer to MERS-CoV or to SARS (est between 2.0 - 4.0).  It is possible that airport screening in the U.S., Hong Kong, Taiwan, and other other nations will provide data that can give us some sense of this crucial number.

And if it also substantially slows the spread of the virus, so much the better.
Posted by Michael Coston at 4:39 AM