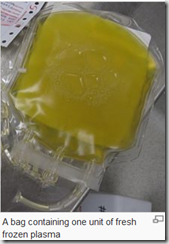 Whenever a new infectious disease threat emerges - one without proven therapeutics - we see a rush to try a variety of pre-existing drugs or treatments in hopes of finding something that can reduce symptoms and hopefully save lives.


Often, early reports are promising, only to falter later under greater scrutiny.  The press loves these sorts of stories, however, and touts them heavily.

Overnight China Daily carried the following article, which has been dutifully echoed across international media.

A therapy for the novel coronavirus that involves the plasma of recovered patients has started to show effects, according to Zhang Dingyu, president of Jinyintan Hospital in Wuhan, Hubei province, a major battleground for the outbreak.

The plasma contains large volumes of antibodies for the deadly pathogen, Zhang told a daily news conference late on Thursday.

He pleaded to recovered patients to donate blood to the benefit of all.

In the latest guideline over the diagnosis and treatment of the virus, issued Feb 5, the top health authorities said plasma of recovered patients could be employed to fight the disease.

More than 10 severe coronavirus patients have received the plasma therapy at a hospital in Wuhan since Feb 8. Within 12 to 24 hours of the therapy, patients have seen a decline in indicators of inflammation and a hike in lymphocytes, among other favorable turns.


Over the years we've looked at a number of attempts to use convalescent plasma - donated by survivors of H5N1, H1N1, H7N9, SARS and most recently MERS and Ebola - to treat infected patients.

While in limited use today, human and animal serum therapy was used extensively during the first half of the 20th century to treat a variety of infectious diseases, including anthrax, scarlet fever, measles, tularemia, diphtheria and rabies.


Although often effective, a relatively high percentage of adverse reactions (serum sickness) along with the development of effective antibiotics and drugs, has seen its use decline.

The idea behind it is pretty simple. Blood is collected from those who been infected, and have recovered, and through a process called plasmapheresis, the blood cells are removed from the blood plasma. This is done by passing the blood through a special filter, or by using a centrifuge. The remaining blood plasma will contain antibodies that could then be injected into severely ill patients.


Convalescent plasma could, theoretically, be used as either a treatment for someone already infected, or as a temporary prophylactic, to prevent infection.

Of course, the donor must be checked for a variety of blood borne diseases (i.e. hepatitis B, hepatitis C, Syphilis, and HIV), and then the plasma is usually heated to inactivate other possible pathogens.

China, in particular, has been a proponent of using plasma convalescent therapy - particularly for avian flu - over the past 15 years.

While some early results reported from convalescent plasma therapy have been promising, longer term studies have proven less compelling.

In 2014, during the height of the West Africa Ebola epidemic, in the WHO Statement: Consultation On Potential Use of Ebola Therapies & Vaccines, one of their top recommendations read:
Two years later, in NEJM: Evaluation of Convalescent Plasma for Ebola Virus Disease in Guinea, it was reported that 84 patients treated in this clinical trial, no statistically significant improvement in survival was noted over the control group.

A clinical trial NCT02190799 for Anti-MERS-CoV Convalescent Plasma Therapy was attempted in Saudi Arabia, but was never completed due to logistical and technical problems.  A 2016 EID Journal report - Feasibility of Using Convalescent Plasma Immunotherapy for MERS-CoV Infection, Saudi Arabia - cited numerous challenges to using this treatment.

And just last October, in The Lancet: Clinical Trial On Use of Convalescent Plasma To Treat Severe Influenza, we saw yet another less-than-stellar result.

A brief description of the study, from https://clinicaltrials.gov/ can be read at:

The Lancet report, with its disappointing findings, can be viewed at:


Anti-influenza immune plasma for the treatment of patients with severe influenza A: a randomised, double-blind, phase 3 trial


The bottom line, from the summary:

The Lancet also carried a commentary on these results, where the authors discuss the likely difference between protective antibody titers ( > 1:40 or 1:80), and therapeutic levels, which may need to be an order of magnitude higher.

Passive immunity for the treatment of influenza: quality not quantity

None of this means that plasma therapy won't prove to be an effective medical countermeasure against COVID-19. It might, and I genuinely hope it is.

But despite the hype, that's something we probably won't know with any certainty for months.
Posted by Michael Coston at 7:47 AM