MRC: Estimating The Impact Of NPIs On COVID-19 In Europe 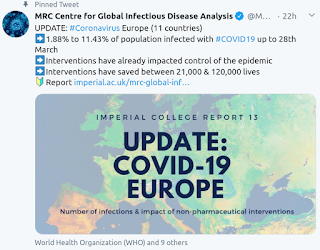 
There's an old adage that says `When Public Health Works . . . nothing happens.'


One of the great ironies of life is the more successful public health interventions are in preventing death and disease, the less credit public health gets.

I can pretty much guarantee that the more successful our social distancing and NPI measures are in reducing deaths from COVID-19, the more those low numbers will be used by critics of the response as `proof' the pandemic threat was overblown.

This, BTW, was the reaction in the year 2000, after the Y2K bug didn't take down the electrical grid or paralyze society.  Nobody remembers - or gives credit to - the hundreds of thousands of computer programmers who spent 2 or 3 years doing Y2K remediation before the rollover date to ensure it didn't happen.

Researchers at the MRC Centre for Global Infectious Disease Analysis at Imperial College London - a WHO Collaborating Center - have released their 13th report, this time estimating the number of lives saved (so far) in Europe due to the implementation of NPIs (Nonpharmaceutical Interventions) like social distancing, the closing of schools and universities, and and the banning of public gatherings.

These are estimates, based on mathematical modeling, but they suggest that the NPIs implemented in Europe have significantly lowered the spread of COVID-19 (SARS-CoV-2), and as a result, tens of thousands of lives have likely been spared.

First the summary from the report, after which I'll have a postscript about estimates.

Report 13: ­­Estimating the number of infections and the impact of non-pharmaceutical interventions on COVID-19 in 11 European countries

Following the emergence of a novel coronavirus (SARS-CoV-2) and its spread outside of China, Europe is now experiencing large epidemics. In response, many European countries have implemented unprecedented non-pharmaceutical interventions including case isolation, the closure of schools and universities, banning of mass gatherings and/or public events, and most recently, widescale social distancing including local and national lockdowns.

In this report, we use a semi-mechanistic Bayesian hierarchical model to attempt to infer the impact of these interventions across 11 European countries. Our methods assume that changes in the reproductive number – a measure of transmission - are an immediate response to these interventions being implemented rather than broader gradual changes in behaviour. Our model estimates these changes by calculating backwards from the deaths observed over time to estimate transmission that occurred several weeks prior, allowing for the time lag between infection and death.

One of the key assumptions of the model is that each intervention has the same effect on the reproduction number across countries and over time. This allows us to leverage a greater amount of data across Europe to estimate these effects. It also means that our results are driven strongly by the data from countries with more advanced epidemics, and earlier interventions, such as Italy and Spain. We find that the slowing growth in daily reported deaths in Italy is consistent with a significant impact of interventions implemented several weeks earlier. In Italy, we estimate that the effective reproduction number, Rt, dropped to close to 1 around the time of lockdown (11th March), although with a high level of uncertainty.

Overall, we estimate that countries have managed to reduce their reproduction number. Our estimates have wide credible intervals and contain 1 for countries that have implemented all interventions considered in our analysis. This means that the reproduction number may be above or below this value. With current interventions remaining in place to at least the end of March, we estimate that interventions across all 11 countries will have averted 59,000 deaths up to 31 March [95% credible interval 21,000-120,000]. Many more deaths will be averted through ensuring that interventions remain in place until transmission drops to low levels.

We estimate that, across all 11 countries between 7 and 43 million individuals have been infected with SARS-CoV-2 up to 28th March, representing between 1.88% and 11.43% of the population. The proportion of the population infected to date – the attack rate - is estimated to be highest in Spain followed by Italy and lowest in Germany and Norway, reflecting the relative stages of the epidemics.

Given the lag of 2-3 weeks between when transmission changes occur and when their impact can be observed in trends in mortality, for most of the countries considered here it remains too early to be certain that recent interventions have been effective. If interventions in countries at earlier stages of their epidemic, such as Germany or the UK, are more or less effective than they were in the countries with advanced epidemics, on which our estimates are largely based, or if interventions have improved or worsened over time, then our estimates of the reproduction number and deaths averted would change accordingly. It is therefore critical that the current interventions remain in place and trends in cases and deaths are closely monitored in the coming days and weeks to provide reassurance that transmission of SARS-Cov-2 is slowing.‌


George E. P. Box, Professor Emeritus of Statistics at the University of Wisconsin, is often credited with coining the familiar adage:

While we can question the accuracy of mathematical models, all of the `official' COVID-19 numbers we get are undoubtedly massive undercounts, whether we are talking the number of infections, or the number of deaths.

There are legitimate reasons to be highly suspicious of China's accounting of their cases and fatalities, but even in Europe and the United States, we never see the full picture of any infectious disease outbreak.

Many mild or moderate infections will go untested, and uncounted.

Not all serious COVID-19 infections, or deaths, will be recognized as being due to the virus as well.  We see this with influenza all of the time, where heart attacks and strokes caused by the flu are cited as the immediate cause of death. 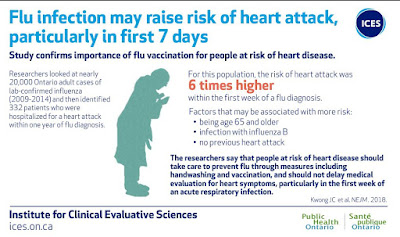 More broadly, in May 2017, in Int. Med. J.: Triggering Of Acute M.I. By Respiratory Infection we looked at research from the University of Sydney that found the risk of a heart attack is increased 17-fold in the week following a respiratory infection such as influenza or pneumonia.

Thousands of people die every day in the United States, but only those who have been tested for the virus will be counted as a pandemic fatality.

The same is true with influenza.  Here in the United States, the CDC can only broadly estimate the impact of flu each year.  This year, they've estimated anywhere between 24,000 and 62,000 influenza-related deaths, which is the largest spread they've posted  (by percentage) since they began calculating seasonal burden in 2010. 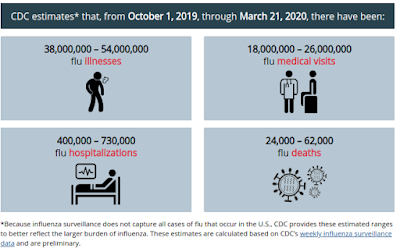 We may eventually find that a significant number of this year's  `flu deaths' - particularly those that occurred in February and March - will turn out to be due to COVID-19.  Assuming that data hasn't been lost.

Whether the number of COVID-19 deaths prevented by NPIs in Europe is near the top of MRC's range (120,000) or closer to the bottom (21,000) - there are sufficient reasons to believe these interventions are helping to slow the spread of the virus.

And while how all of that plays out over the next year or longer is anyone's guess, for now, that is buying time for governments and healthcare systems to better prepare for a second and possibly 3rd wave of the virus over the next 12 to 18 months.
Posted by Michael Coston at 7:44 AM