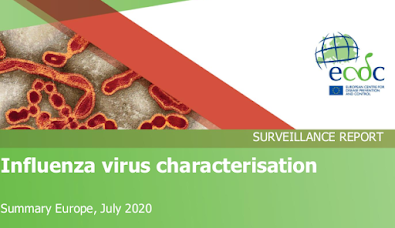 #15,431
As we head into our first full flu season under the shadow of COVID-19 there are a lot of open questions over how this winter's twin  epidemics will interact. While there remain genuine concerns over seeing a  `twindemic' - one that could overburden our already stretched medical system - globally, influenza reporting has been greatly subdued since the arrival of our novel coronavirus.
The most recent WHO Influenza update (below) shows - for the first time I've ever seen - a blank flu map, and indicates only 40 positive flu samples were received by their laboratories over the month of July (a 90-fold decrease over July 2019). 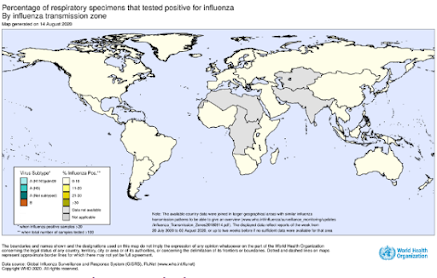 National Influenza Centres (NICs) and other national influenza laboratories from 65 countries, areas or territories reported data to FluNet for the time period from 20 July 2020 to 02 August 2020 (data as of 2020-08-19 09:14:02 UTC). The WHO GISRS laboratories tested more than 2050491 specimens during that time period.

Admittedly, not a lot of information to go on.  And it isn't entirely clear whether all of this massive decline in reported global  flu activity reflects reality, or is the result of public health resources being diverted to the COVID-19 pandemic.

That said, social distancing, hand hygiene, and face covers used against COVID-19 covers undoubtedly suppress flu transmission as well.  At this point, no one really knows what to expect this fall and winter.

One source of additional information we do have comes from the ECDC's Monthly Influenza Virus Characterisation Report, which provides us with some of the most detailed analysis of influenza virus samples submitted by EU countries.

But this year, the ECDC report has analysed fewer virus samples than usual.

All of this is important, not only to give us an idea of what to expect this fall and winter in the Northern Hemisphere, but also to guide flu experts in selecting the vaccine components in September for next year's Southern Hemisphere flu vaccine.

While the number of virus samples tested remains small, and are submitted from a limited geographic region, three trends have appeared over the past few ECDC reports.

Since all three (H1N1, H3N2, B/Victoria) vaccine virus components have been updated for the 2020-2021 Northern Hemisphere's flu shot, we won't know until January or February of next year how effective they are going to be in preventing infection.

The full 29-page PDF report will be tough sledding for non-experts, so I've only posted the executive summary below.  I'll have a brief postscript when you return.

Since the June 2020 characterisation report report1, three shipments of influenza positive specimens from EU/EEA countries have been received at the London WHO collaborating Centre , the Francis Crick Worldwide Influenza Centre (WIC). In total (since week 40/2019) 2019), 1661 virus specimens have been received , with collection dates after 31 August 2019.

Thirty two B/Victoria lineage viruses from EU/EEA countries were antigenically characterised in July , all were subclade 1A(Δ3)B. Four viruses were not recognised well by antiserum raised against B/Washington/02/2019, the vaccine virus for the 2020 2021 northern hemisphere influenza season. Poor recognition was associated with HA1 a mino acid substitutions of either N126K or T155A .

In total, 306 EU/EEA viruses have been characterised genetically at the WIC: 290 were sub clade 1A(Δ3)B and 16 were subclade 1A(Δ2). A single B/Yamagata lineage virus from France , with a collection date in February 2020 , was antigenically characterised in July. As for all recently circulating B/Yamagata lineage viruses a ll eight EU/EEA viruses characterised genetically at the WIC since week 40/2019 belong to genetic clade 3 and contain at least two HA amino acid substitutions (HA1 L172Q and M251V) compared to B/Phuket/3073/2013, the antigenic effects of which have been minimal as assessed in earlier reports.

A bad flu season, combined with COVID-19, could easily overwhelm our medical system, and so a great deal of emphasis is being placed on this year's flu vaccination campaign, with the CDC reporting a record 194 million to 198 million doses of influenza vaccine  on order this year.
Last week, the CDC held a COCA Call : Influenza Vaccination Recommendations & Clinical Guidance during the COVID-19 Pandemic, which is now archived for viewing at this link.

This fall's vaccination campaign also will serve as a dress rehearsal for next year's anticipated COVID-19 vaccine roll out (see The `Other' Vaccine Challenge This Fall).

Deploying a record number of flu vaccines in the middle of a COVID pandemic - when most people are practicing social distancing, and many doctor's offices are seeing fewer people - will prove challenging.

Hopefully the lessons learned from this fall's flu vaccine campaign will make for a smoother roll out of the COVID-19 vaccine, if and when a safe and effective vaccine is made widely available.

Posted by Michael Coston at 6:57 AM