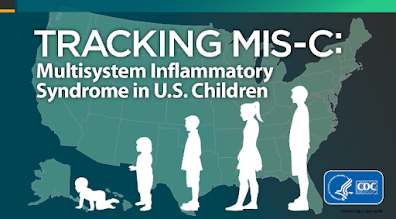 While it is true that most children appear to only suffer mild to moderate illness with SAR-CoV-2 infection, as of late July (see MMWR: COVID-19–Associated Multisystem Inflammatory Syndrome in Children — U.S., March–July 2020) more than 600 kids in the United States have been hospitalized with a severe, life-threatening autoimmune response dubbed MIS-C.

We first saw this condition described in the UK back in April (see PICS: NHS Alert On Possible Severe Pediatric COVID-19 Complication), and while it is referred to as MIS-C in the United States, it is called PIMS-TS in the UK.

The CDC describes the syndrome on their MIS-C website as:

Multisystem inflammatory syndrome in children (MIS-C) is a condition where different body parts can become inflamed, including the heart, lungs, kidneys, brain, skin, eyes, or gastrointestinal organs. Children with MIS-C may have a fever and various symptoms, including abdominal (gut) pain, vomiting, diarrhea, neck pain, rash, bloodshot eyes, or feeling extra tired. We do not yet know what causes MIS-C. However, many children with MIS-C had the virus that causes COVID-19, or had been around someone with COVID-19.

While we've looked at a wide range of reports of long-term sequelae from COVID-19 in `recovered' adults (see PAHO Epi Alert: Complications & Sequelae Of COVID-19), very little is known about the lasting health impacts of MIS-C in children.

Researchers at Children’s Hospital of Philadelphia (CHOP) reported last week, however,  that they have found subtle, but worrisome, signs of heart damage among recovered pediatric MIS-C patients.

We've got a press release, a link to the study, and some excerpts from the CHOP blog:

September 21, 2020— Using sensitive parameters to assess cardiac function, researchers at Children’s Hospital of Philadelphia (CHOP) have found that cardiac involvement in multisystem inflammatory syndrome in children (MIS-C) differs from Kawasaki disease (KD) and is associated with myocardial injury. The findings were published recently in the Journal of the American College of Cardiology.

Thought to be a post-viral hyperinflammatory response related to COVID-19, MIS-C has some clinical overlap with KD, an inflammatory condition that causes rash, fever, and inflammation of the blood vessels in children. However, the two conditions differ in important ways, particularly when it comes to cardiac involvement. By utilizing a cardiac parameter known as strain, which measures subtle changes in cardiac function not detected by conventional echocardiography, the research team was able to show that while the coronary arteries were not typically involved in MIS-C as they are in KD, myocardial injury was more common in MIS-C.

“By using this novel approach for assessing cardiac function, we were able to detect subtle myocardial changes that were not detected by conventional echocardiography,” said senior author Anirban Banerjee, MD, FACC, an attending cardiologist with the Cardiac Center at CHOP. “Long-term follow-up is essential to fully understand this new disease, including cardiac MRI studies to evaluate for myocardial scarring. This is especially true when considering the possible lingering effects of myocardial injury and consequent need for caution in sports participation.”

While only one case in the MIS-C group presented with coronary artery dilation, cardiac injury and dysfunction were common, occurring in approximately 60% of MIS-C patients. Left ventricular systolic and diastolic function were worse in MIS-C compared to KD, and although systolic dysfunction in MIS-C patients recovered quickly within several days, diastolic dysfunction persisted. In addition to the left ventricle, both the right ventricle and left atrium – sometimes called the “forgotten chambers” of the heart – were significantly affected. Abnormal strain measurements in the latter two chambers correlated strongly with biomarkers of myocardial injury in MIS-C.

“Larger studies will be needed to fully characterize coronary involvement in MIS-C,” Banerjee said. “Given the results of this study, we recommend following up with MIS-C patients several times over a one-year period, in a pattern similar to patients with Kawasaki disease, even if they look well outwardly.”

Condensed abstract: Multisystem inflammatory syndrome in children (MIS-C) is an illness that resembles Kawasaki Disease (KD) or toxic shock, reported in children with a recent history of COVID-19 infection. This study analyzed echocardiographic manifestations of this illness. In our cohort of 28 MIS-C patients, left ventricular systolic and diastolic function were worse than in classic KD. These functional parameters correlated with biomarkers of myocardial injury. However, coronary arteries were typically spared. The strongest predictors of myocardial injury were global longitudinal strain, right ventricular strain, and left atrial strain. During subacute period, there was good recovery of systolic function, but diastolic dysfunction persisted.


Conclusions: Unlike classic KD, coronary arteries may be spared in early MIS-C, however, myocardial injury is common. Even preserved EF patients showed subtle changes in myocardial deformation, suggesting subclinical myocardial injury. During an abbreviated follow-up, there was good recovery of systolic function but persistence of diastolic dysfunction and no coronary aneurysms.

And for some additional background, some excerpts from this CHOP Cornerstone Blog post:

What are the clinical/therapeutic implications of these findings?

Since cardiac involvement is common in MIS-C, physicians may have to treat them in a manner as we would treat other viral myocarditis cases. We noted cardiogenic shock in 85% of our MIS-C patients. In contrast, the incidence of cardiogenic shock is quite rare in classic KD. Physicians should remember that along with conventional echocardiography, evaluation of strain parameters are quite useful in evaluating subtle changes in heart function in MIS-C patients. Long-term effects of myocardial injury will need to be studied, as this may have implications on sports participation in these children.

What are the main messages you hope physicians will take away from this report?

We have several take-home messages for physicians in the front line. First, coronary arteries are relatively spared (4%) in the acute stage of this disease. Second, cardiac injury/dysfunction is common (60%), with subtle myocardial changes detected by echocardiographic strain parameters. Third, systolic dysfunction recovered quickly within several days; however, diastolic dysfunction persisted. Lastly, not only the left ventricle, but the two “forgotten chambers” of the heart (left atrium and right ventricle), were significantly affected. In fact, strain measurements in the latter two chambers correlated strongly with biomarkers of myocardial injury in MIS-C.

Posted by Michael Coston at 5:26 AM