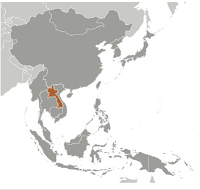 As late as the spring of 2015, H5N1 was producing large outbreaks in humans, particularly in Egypt (see EID Journal: H5N1 In Egypt), but over the past several years H5N1 has faded from the headlines.

The last reported human infection with H5N1 was in the spring of 2019, in Nepal (see WHO SEARO Statement On Nepal H5N1 Case) following a string of outbreaks in wild birds and poultry in India and Nepal. Before that, you have to go back to 2017.

But today, Taiwan's Ministry of Health is reporting they have been notified of an H5N1 human infection detected last month in a 1 year old child in  Laos, along with the H9N2 case in China I mentioned yesterday.  Hong Kong's weekly Avian Influenza Update also carries a report on this most recent case.

While such reports have become rare in recent years, they probably still occur more often than is reported. Surveillance, testing, and reporting in much of the world is limited for novel influenza, and often - particularly when it is a mild cases - detection requires a certain amount of luck.

Details are scant, as the WHO doesn't appear to have published a full report as yet, but the child was reportedly mildly infected, and has recovered.

Mainland China and Laos have the first two cases of influenza A in this season. The travel epidemic in Laos is recommended to be upgraded to the first level of attention (Watch)

Release Date: 2020-11-10 The Department of Disease Control said that the World Health Organization (WHO) announced 1 case of H9N2 influenza in Mainland China and 1 case of H5N1 influenza in Laos, the first 2 cases of new type A influenza in this epidemic season (from October).

Among them, a 3-year-old girl in Zhuhai City, Guangdong Province, Mainland China, became ill on October 12, and a 1-year-old girl in Sarawan Province, Laos, became ill on October 13. All cases had a history of poultry exposure or live poultry near their homes before the onset. Due to the possible environmental exposure risks in the local area, Guangdong Province has now listed the second-level alert (Alert) for the new influenza A travel epidemic, and will raise Laos to the first-level watch (Watch) from November 9th.

The global H9N2 influenza has a total of 48 cases since 2013, with 38 cases in Mainland China as the majority, followed by Egypt with 3 cases, Bangladesh and Hong Kong (imported from Guangdong Province) each with 2 cases, Oman, India and Senegal with 1 case each, and a total of 1 case so far. Cases died, with a fatality rate of 2.1%.

A total of 862 cases of H5N1 influenza have been notified in 17 countries worldwide since 2003. Egypt, Indonesia, and Vietnam have been notified as the most countries. So far, a total of 455 cases have died, with a fatality rate of 52.8%. However, there have been no cases in the world for more than a year. The WHO stated that since the virus is still detected in poultry and the environment, cases are expected to still occur, but the virus has not yet been able to spread continuously between humans, so the risk of human-to-human transmission is low. The current new type A influenza travel epidemic recommendations include Anhui, Fujian, Guangdong, Hunan and Shandong provinces in Mainland China as the second level alert (Alert), and other provinces and cities in Mainland China and Laos as the first level alert (Watch) .

The Department of Disease Control reminds that when Chinese people go to the above-mentioned countries, they should implement the principle of "5 Musts and 6 Nos". The 5 requirements: Poultry meat and eggs must be cooked, clean hands must be washed with soap, if symptoms occur, they must wear a mask and seek medical treatment quickly, and have long-term contact with birds and birds Those who want to get influenza vaccination, have a balanced diet and exercise properly; 6 no: do not eat raw poultry eggs or products, do not smuggle or buy meat from unknown sources, do not touch or feed migratory birds and poultry, do not release them in the wild and Discard poultry and birds at will, do not live together with other poultry and livestock, and do not go to livestock farms or markets/exhibits. If you have a fever or flu-like symptoms when you return to your country, you should actively inform the airline staff and the quarantine personnel at the airport and port; if you have the above symptoms after returning to your country, you should wear a mask and seek medical treatment as soon as possible and inform the doctor of the travel history. For related information, please refer to the CDC website (https://www.cdc.gov.tw/), or call the toll-free anti-epidemic line 1922 (or 0800-001922).

From today's HK Avian Influenza Update, we have these two charts showing the latest case from Laos and the history of H5N1 infections in humans since 2003. 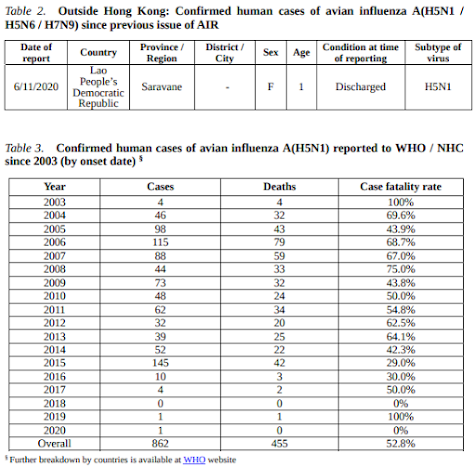 While not as feared as it once was, H5N1 continues to evolve, reassort, and occasionally infect humans. H5N1 represents not just a single strain, but rather a wide array of clades, subclades, and variants circulating around the globe - all following their own evolutionary pathways (see chart below). 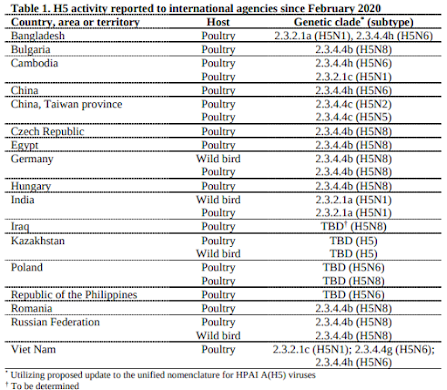 Unlike more humanized influenzas, H5N1 has never quite learned how to efficiently spread from human-to-human, and over time, some clades appear to have lost some of their ability to infect humans.  But what was lost could always be regained in the future.

While a single, mild case in Laos does not a crisis make - just over half of all known human infections with H5N1 over the past two decades have proved fatal - making it worthy of our attention.

After three lackluster years, avian influenza activity appears to be on the upswing, with H5N8/H5Nx reported in both Europe and East Asia. While it is too soon to say how much of an impact this latest resurgence will have, it reminds us that nature's laboratory is open 24/7 and we need to remain vigilant.