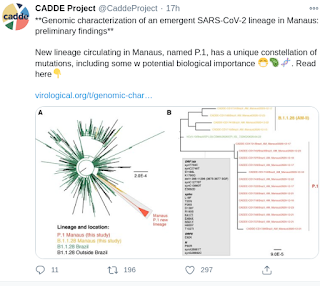 Over the past couple of weeks we've seen two E484K mutation bearing COVID variants described as emerging in South America; one in Rio De Janeiro, Brazil, and the other in Buenos Aires, Argentina.

While they share some of the same mutations as found in the B.1.1.7 (UK) and 501Y.V2 (South African) variants, they are believed to have evolved independently in South America.

They are also believed to be more transmissible, and the inclusion of the E484K mutation has raised concerns  over potentially reduced antibody recognition, which might affect monoclonal antibody treatments, and potentially lower the effectiveness of current vaccines.

Yesterday a new paper appeared on Virological.org  that describes yet another variant, spreading in Manaus, Brazil - which is roughly 2,000 miles north of Buenos Aires in equatorial Amazonas state.

While this variant - named P.1 - shares some of the same mutations as the other South American variants we've seen , it is described as having ` . . . .  a unique constellation of lineage defining mutations, including several mutations of known biological importance such as E484K, K417T, and N501Y."

Rather than cherry pick excerpts from the report, I'll simply post the link and let you read it for yourself.

Since I'm not a virologist (or a scientist of any stripe), I'll leave the expert analysis to others.

One (of many) interesting twitter threads on this apparent `convergent evolution' of COVID variants around the world that I think you'll find very much worth reading comes from Bill Hanage, Assoc Prof at Harvard T. H. Chan School of Public Health.

Follow the link to read all 15 parts, and responses. 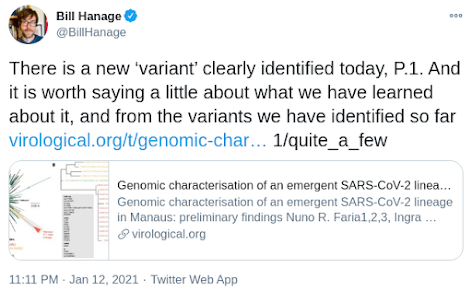 Posted by Michael Coston at 8:09 AM