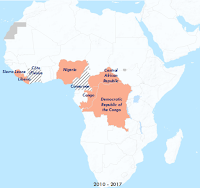 While the emergence of a novel influenza has long been considered the most likely cause of the next pandemic, since the close call with SARS in 2002-2003, coronaviruses have been added to the list.  Their reputation was further enhanced when - in 2012 - a previously unknown coronavirus (MERS-CoV) emerged in camels in the Middle East and began infecting humans.

The emergence of COVID-19 a little over a year ago cemented the pandemic potential of coronaviruses.

Beyond these two broad viral threats, there are others with either regional epidemic -or pandemic - potential, including Clade X; the one we haven't identified yet. But among the others on our radar, two in particular have gotten a good deal of attention the past few years.

The more severe form of Monkeypox is most commonly found in the Central Africa countries of the DRC and the CAR - where outbreaks have been on the rise for years - presumably because smallpox vaccinations (which provided up to 85% protection) were halted in the late 1970s.

A 2016 study (see EID Journal:Extended H-2-H Transmission during a Monkeypox Outbreak) looked at a large 2013 outbreak of Monkeypox in the DRC and suggested that the virus's epidemiological characteristics may be changing (again, possibly due to the waning smallpox vaccine derived immunity in the community).

All of which brings us to a new EID Journal report that illustrates how Nigeria's population becomes more susceptible to the virus with each passing year.  This is a lengthy and detailed report, and I've only posted some excerpts.  Follow the link to read it in its entirety.
When you return I'll have a postscript about the Monkeypox outbreak in the United States in 2003.

Reemergence of Human Monkeypox and Declining Population Immunity in the Context of Urbanization, Nigeria, 2017–2020

A monkeypox outbreak in Nigeria during 2017–2020 provides an illustrative case study for emerging zoonoses. We built a statistical model to simulate declining immunity from monkeypox at 2 levels: At the individual level, we used a constant rate of decline in immunity of 1.29% per year as smallpox vaccination rates fell. At the population level, the cohort of vaccinated residents decreased over time because of deaths and births. By 2016, only 10.1% of the total population in Nigeria was vaccinated against smallpox; the serologic immunity level was 25.7% among vaccinated persons and 2.6% in the overall population.

The substantial resurgence of monkeypox in Nigeria in 2017 appears to have been driven by a combination of population growth, accumulation of unvaccinated cohorts, and decline in smallpox vaccine immunity. The expanding unvaccinated population means that entire households, not just children, are now more susceptible to monkeypox, increasing risk of human-to-human transmission.

Since September 2017, Nigeria has been experiencing the largest monkeypox outbreak in the country’s history. As of November 2019, the country had reported 183 confirmed cases across 18 states (1). This outbreak is also the largest recorded that has been caused by the West Africa clade of the monkeypox virus (MPXV). Beyond its scale, this outbreak is an illustrative case study for emerging zoonosis because of its epidemiologic characteristics.

Preliminary genetic analysis suggests multiple zoonotic introductions from animal reservoirs into the human population (2). In 2018, an MPXV sample isolated from a case-patient in Cameroon was found to be genetically similar to a sample from Nigeria despite no epidemiologic linkage, raising the possibility of an epizootic event spanning the Nigeria-Cameroon border (3). This finding is uncharacteristic of the West Africa clade, which tends to cause temporally and geographically isolated outbreaks (4,5). Moreover, the 2017–2020 Nigeria outbreak showed a higher prevalence among adults; 78% of patients were 21–40 years of age (1), whereas historically, most case-patients were <15 years of age (6). The changing demographics of this outbreak may offer insights into reasons behind the reemergence of monkeypox in West Africa.

We hypothesized 2 main mechanisms to explain this resurgence after 40 years of no reported cases,
The 2 theories, not mutually exclusive, represent the loss of 2 different barriers to spillover (8). We aimed to examine the potential role of declining population immunity and how it interacts with the country’s rapid urbanization to affect the reemergence of monkeypox in Nigeria. Whereas data on urbanization and land expansion is available, the dearth of data from recent serologic surveys makes it challenging to separate out changes in the levels of residual immunity from smallpox vaccination from the endemicity of monkeypox in the population. By using a statistical model to account for declining individual-level immunity, this study aimed to quantify the fraction of the population that is susceptible to monkeypox and plot the growth of this population during 1970–2018.
(SNIP)
The wide geographic spread of the 2017 outbreak in Nigeria was likely driven by the lower level of residual OPXV immunity, population growth, an increase in the proportion of susceptible persons, and potential spillover events at the animal-human interfaces caused by human settlements encroaching into forested areas. The initial spillovers may have been followed by rapid human-to-human transmission enabled by high population density and a growing immunologically naive population fully susceptible to MPXV. High prevalence among working adults 21–40 years of age, born after universal vaccination programs were discontinued, suggests that declining population immunity plays a substantial role in the reemergence of monkeypox.

Fewer monkeypox cases were diagnosed in 2020, which has been attributed to the self-limiting nature of MPXV human transmission (e.g., because of nonairborne mode of transmission, low probability of infection per contact) (4,42). However, we cannot rule out the possibility of future mutations that might enable sustained human-to-human transmission or adoption of more cosmopolitan animal reservoir hosts; such occurrences would present substantial public health risks.
These ongoing risks highlight the importance of serosurveillance to understand the extent of OPXV endemicity within the population. The role of vaccination in preventing monkeypox is being considered, and clinical trials for healthcare workers are underway (43,44). In the absence of seroprevalence data in Nigeria, this study provides an alternative method to estimate the residual level of vaccine immunity and adds another perspective to the discourse on monkeypox reemergence in West Africa.
(Continue . . . )

Monkeypox is normally restricted to small outbreaks in Africa, but in 2003 we saw a rare multi-state (Illinois, Indiana, Kansas, Missouri, Ohio, and Wisconsin) outbreak in the United States when a Texas animal distributor imported hundreds of small animals from Ghana, which in turn infected prairie dogs that were subsequently sold to the public (see MMWR Update On Monkeypox 2003).

While opportunities to export Monkeypox during the COVID pandemic have been limited, in 2020 the WHO reports that the DRC notified them of a total of 6,257 suspected cases including 229 deaths (CFR 3.7%) across 133 health zones from 17 out of 26 provinces in the country.

Last summer, in WHO: Modelling Human-to-Human Transmission of Monkeypox, we looked at a WHO assessment which cautioned `. . . . with declining immunity to orthopoxvirus species, monkeypox can pose an ever-increasing threat for health security.'

All of which makes Monkeypox an emerging public health threat well worth our attention.

Posted by Michael Coston at 6:15 AM