The UK Adds Another VUI (Variant Under Investigation) To Their List 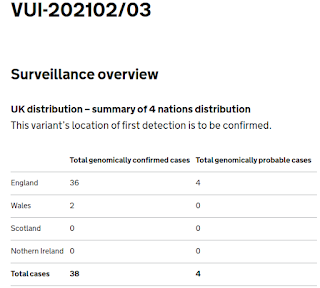 Two weeks ago, in UK PHE: E484K Mutation Detected In A Small Number of B.1.1.7 Variant VIruses, we looked at the brief announcement of yet another new variant under investigation. A week later, the UK upgraded (VUI 202102/02) to a variant of concern (see UK: NERVTAG Names New COVID VOC).

Today the UK has published their latest Variants: distribution of cases data report, and once again they have added another variant under investigation to the list; VUI-202102/03.

Known as B.1.525 outside of the UK, this variant - which carries both the E484K and the Q677H mutations that we've discussed before.  It has already been reported in 11 countries (United Kingdom, Denmark, Nigeria, United States of America, Canada, France, Ghana, Australia, Jordan , Singapore, Finland, Belgium, Spain).

The UK performs more genomic sequencing than any other country, which probably explains the high number (n=7) of known SARS-CoV-2 variants being actively tracked there.

How B.1.525 will stack up against the more dominant B.1.1.7 (and other emerging) variants remains to be seen. Most variants will fall by the wayside, unable to compete with more robust viruses, but a few could prove problematic.

As of today's report, the UK currently has 5 VOCs (Variants of Concern) and 2 VUIs (Variants under Investigation) on their watch list. 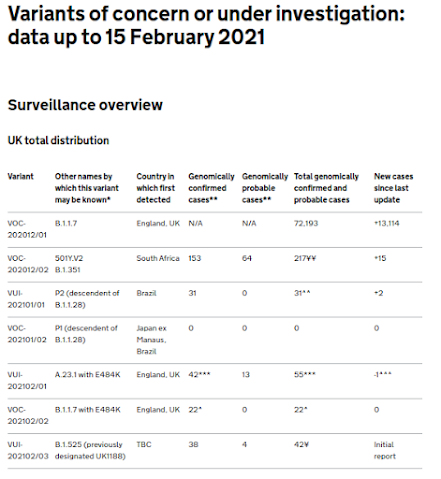 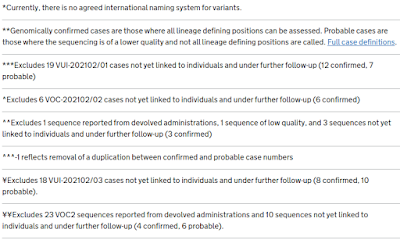 Posted by Michael Coston at 3:09 PM