PrePrint: The B1.351 and P.1 Variants Extend SARS-CoV-2 Host Range to Mice 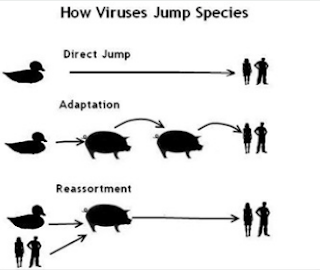 #15,878
Yesterday, in COVID Variant B.1.1.7 & Companion Animals, we looked at the first confirmed detections of COVID variant B.1.1.7 in dogs and cats - in both the United States and the UK - and a preprint suggesting that this emerging variant may be producing more severe symptoms (i.e. myocarditis) in companion animals.

We also discussed the known host range of SAR-CoV-2, and the concerns that the virus might establish itself in other species over time, which could complicate pandemic control, and even provide new evolutionary pathways for the virus to follow.

While the SARS-CoV-2 virus was originally thought to have a relatively limited host range (see Susceptibility of Ferrets, Cats, Dogs & Other Domestic Animals to SARS-CoV-2), over the past year new information has emerged.
The CDC summarizes recent findings on their COVID-19 and Animals webpage.

Research on animals and COVID-19
Many studies have been done to learn more about how this virus can affect different animals.

These findings were based on a small number of animals, and do not show whether animals can spread infection to people. More studies are needed to understand if and how different animals could be affected by COVID-19.

The finding that pigs, chickens, and ducks do not appear susceptible to infection is particularly fortuitous, as farmed animals can often provide an emerging virus a safe harbor, and an evolutionary playground in which to experiment (see Preprint: Recurrent Mutations in SARS-CoV-2 Genomes Isolated from Mink Point to Rapid Host-Adaptation).

But the concern is that as SARS-CoV-2 continues to evolve, it may `figure out'  - through genetic trial and error - how to infect, and spread in previously poorly susceptible hosts.

Last month, in EID Journal: SARS-CoV-2 Exposure in Escaped Mink, Utah, USA, we looked at a seroprevalence study done on wildlife captured in and around two infected mink farms, looking for signs of spillover.

In line with previous findings that (non-transgenic old world) mice are not susceptible to the virus, the authors reported that : 11 mink escapees tested positive for SARS-CoV-2 antibodies by virus neutralization (Table). No other animal had a detectable antibody response.

All of which brings us to a new (preprint) study that - similar to yesterday's report - suggests some of these emerging variants may be getting better at adapting to non-human hosts.

I've only included the link, abstract, and some excerpts from a much longer (16-page PDF) report.  Follow the link to read it in its entirety.

Receptor recognition is a major determinant of viral host range, as well as infectivity and pathogenesis. Emergences have been associated with serendipitous events of adaptation upon encounters with a novel host, and the high mutation rate of RNA viruses has been proposed to explain their frequent host shifts 1.

SARS-CoV-2 extensive circulation in humans has been associated with the emergence of variants, including variants of concern (VOCs) with diverse mutations in the spike and increased transmissibility or immune escape 2.

Here we show that unlike the initial virus, VOCs are able to infect common laboratory mice, replicating to high titers in the lungs.

This host range expansion is explained in part by the acquisition of changes at key positions of the receptor binding domain that enable binding to the mouse angiotensin-converting enzyme 2 (ACE2) cellular receptor, although differences between viral lineages suggest that other factors are involved in the capacity of SARS-CoV-2 VOCs to infect mice.
This abrogation of the species barrier raises the possibility of wild rodent secondary reservoirs and provides new experimental models to study disease pathophysiology and countermeasures.
(SNIP)

Host range expansion or switch to other species has been prevalent in the course of coronaviruses evolutionary history 3 . Understanding the host range and how it is modified as the pathogen evolves is critical to estimate the emergence risk and determine the reservoirs to monitor. In the case of the severe acute respiratory syndrome coronavirus 2 (SARS-CoV-2), responsible for the ongoing coronavirus disease 2019 (COVID-19) pandemic, animals such as non-human primates, hamsters, ferrets, minks and cats were shown to be permissive 4 .

By contrast, the zoonotic virus was shown to not replicate in mice and rats due to poor binding of the virus spike on the rodent cellular receptor angiotensin-converting enzyme 2 (ACE2).

At the end of 2020, the emergence of variants of concern (VOC) was noted in different parts of the world. The lineage B.1.1.7 (Pango designation 5 , also named 20I/501Y.V1 or VOC202012/01) was noted for its rapid spread in the UK 6 , while lineage B.1.351 (20H/501Y.V2) expanded in multiple regions of South Africa 7 and the P.1 (20J/501Y.V3) lineage emerged in Manaus, Brazil 8 . The global circulation and spread of these variants have led to concerns about increased transmission and their potential to evade immunity elicited by vaccination or naturally acquired.

All three variants harbor the N501Y change in the spike glycoprotein which belongs to a set of 6 key amino acid residues critical for the tight interaction of the RBD with hACE2 9 . Strikingly, this mutation was also noted, among others, in independently generated mouse-adapted SARS-CoV-2 strains 10,11. Here, we assessed the replication potential in cells and in mice of low-passage clinical SARS-CoV-2 isolates of the main lineages.

(SNIP)
Finally, although the infectious dose and the transmissibility between mice remain to be established for these new variants, as well as the permissiveness of related animal species, these results raise major questions on the risk of mice or other rodents living in proximity to humans of becoming secondary reservoirs for SARS-CoV-2 in regions where the B.1.351, P.1 or other specific variants circulate, from where they could evolve separately and potentially spillback to humans.
Indeed, rodents have been hypothesized as the ancestral host of some betacoronaviruses (lineage A, which includes the seasonal human coronaviruses OC43 and HKU1 20,21). While rodent densities are highly variable and more difficult to control, similar and actionable concerns were raised upon the detection of SARS-CoV-2 in Mink farms in The Netherlands 22 and in Denmark 23 due to the density of animals housed, and the detection of changes in the virus genome.
We posit that host range should be closely monitored along the continued evolution of SARS-CoV-2.

Whether this apparent expansion of SARS-CoV-2's host range turns out to be merely a footnote in the evolutionary history of this pandemic virus - or rises to greater significance - remains to be seen.

It is, however, a reminder that with highly mutable viruses, we can't afford get too comfortable with their past behavior, as it can easily change over time.

Posted by Michael Coston at 8:48 AM