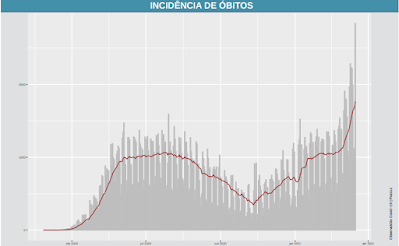 We've been watching the devastating second COVID wave in Brazil - and the concurrent rise of a new, more aggressive SARS-CoV-2 variant B.1.1.28.1 (P.1) - since early January.

A January technical report from FIOCRUZ (Fundação Oswaldo Cruz) found that the P.1 variant had rapidly overtaken all other variants in the region, jumping from 51% of all sequenced samples in December to 91% by the first half of January.

Over the past month, we've watched as the reports from Brazil have grown increasingly dire.

FIOCRUZ Special Bulletin: The biggest Sanitary and Hospital Collapse in the History of Brazil

FIOCRUZ Weekly Bulletin: Worst COVID Scenario Since The Beginning Of The Pandemic

While its impact outside of Brazil has been limited, we've also seen evidence that the P.1 variant continues to spread around the world, sparking concerns that what is happening in Brazil today may begin to happen elsewhere in the months ahead (see UK PHE Now Tracking 9th Variant (VUI 202103/01) & Update On P.1 Variants).

While the evidence suggests the P.1 variant is more transmissible than the `wild type' COVID, and it has been linked to reduced antibody recognition - which may increase reinfection risks and potentially lower the effectiveness of current vaccines - less is known about its severity.
Today we have a pre-print, published yesterday on MedRxiv, that reports a dramatic increase in case fatality rates during the month of February in Paraná, Brazil, particularly among young and middle aged adults. 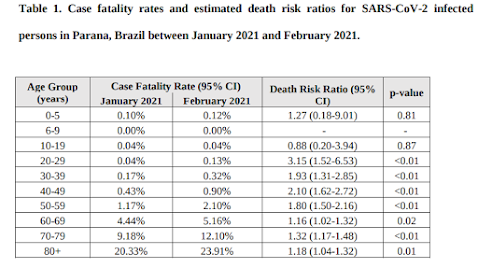 The table above shows a more than 3-fold increase in deaths among COVID cases aged 20 to 29, compared to January.  Deaths among those aged 30 to 49 roughly doubled.

Of particular note, these increases `coincided with the second consecutive month of declining number of diagnosed SARS-CoV-2 cases', lessening the the likelihood that overcrowded or stressed hospitals played a significant role in these deaths.

This is a yet-to-be peer reviewed article, and is based on data collected from just one Brazilian state, and so these findings should be interpreted with a certain amount of caution.  But these results appear consistent with what we have seen from media reports out of Brazil, and the alarms being raised by FIOCRUZ.

Brazil is currently suffering a deadly surge of severe acute respiratory syndrome coronavirus 2 (SARS-CoV-2) infections, which has been attributed to the spread of a new strain known as P.1 (B.1.1.28.1). In this investigation, we analyzed coronavirus disease 2019 (COVID-19) public health data from Parana, the largest state in southern half of Brazil, between September 1, 2020 and March 17, 2021, to evaluate recent trends in case fatality rates in different age groups.
A total of 553,518 cases of SARS-CoV-2, 8,853 currently registered as fatal, were finally included in our analysis. All age groups showed either decline or stabilization of the case fatality rates (CFRs) between September 2020 and January 2021.
In February 2021, an increase in CFR for almost all age groups could be instead observed. All groups above 20 years of age showed statistically significant increases in CFR when diagnosed in February 2021 as opposed to January 2021.

Vaccination, even with deduced antibody recognition by the P.1 variant - is believed to help lower the severity of infection with this virus, even if it doesn't always prevent reinfection.
But for countries yet to deploy vaccines in quantity - or those with low uptake due to vaccine hesitancy - P.1 could prove a real threat should this variant continue its world tour.
Posted by Michael Coston at 4:27 AM