Global Spread of COVID Variant B.1.1.7

In a sign of how quickly things are changing during this pandemic, late last week the CDC retired their original COVID variant map/report which they launched just over 90 days ago to track a single (B.1.1.7) variant.

By the end of January they had shoehorned 2 more variants (P.1 & B.1.351) into their original report, but by then it was obvious more variants would need tracking.  We took our first look at their new format in late March.

While not updated as often (now on a bi-weekly schedule), and lacking the interactive map, the new format shows us in both graphic, and table views, how rapidly the percentages of detected variants are changing across the country (see below). 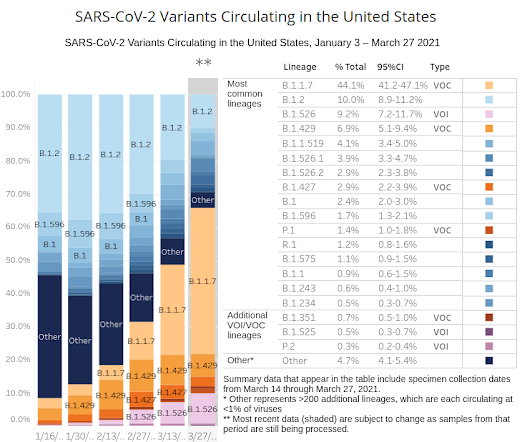 Today's update is based on preliminary data as of March 27th, and a more finalized version will be released in the days ahead, which we'll look at as well. There is a lot of data here to unpack, and so we'll split the above graphic into two pieces.

On the left side (below), have a  12-week graphic comparison of the shifting prevalence - based on available data - of more than 20 variants that are being tracked by the CDC in the United States.

Given the limits of surveillance and testing, these numbers should be viewed as representative of trends rather than precise counts.  Some states are doing far more testing than others, and in all cases, only a fraction of cases are tested. 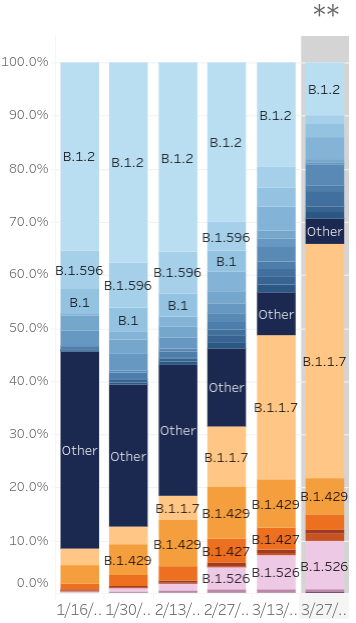 Exhibiting a less linear ascent, B.1.427 and P.2 have both receded slightly in the last two weeks, although both have increased over their standings of February.

Since we are seeing choppy results among some of the less dominant variants - which may be due to variability in testing and reporting - we'll need to follow these trends for weeks to come to know which variants are truly fading, and which are gaining.

For now, however, P.1 appears to be getting more traction than B.1.531, which had established an early lead among the second tier of variant threats. Likewise, B.1.526 continues to make solid gains.

The left side of the chart shows the percentages in the most recent two-week sampling period, showing (as predicted by the MMWR in January) that the B.1.1.7 variant was (by far) the dominant strain the the United States by the end of March. 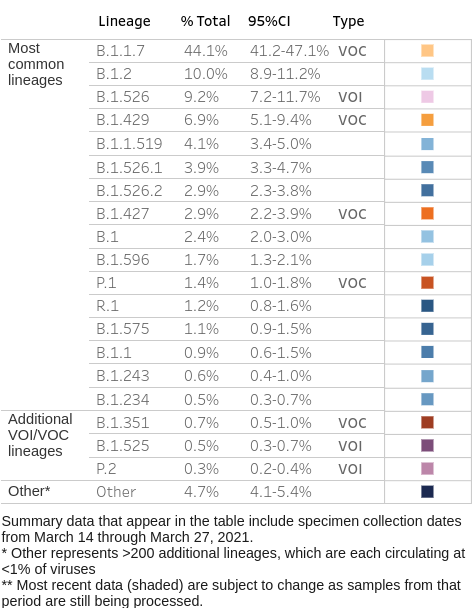 Today's update also has a spreadsheet showing the proportion of different VOCs (variants of concern) and VOIs (variants of interest) by state.

Some quick takeaways from the data include:

These are of course just snapshots in time, and based on incomplete data. The CDC warns:

Proportions in the table above are only shown for states for which CDC has at least 300 sequences from specimens collected during this timeframe. Proportions are calculated using empirical (unweighted) data, which are subject to change over time and will be updated as more data become available. Proportions of variants do not represent the total number that may be circulating in the United States and may not match cases reported by states, territories, tribes, and local officials. For states and jurisdictions not listed, CDC has insufficient genomic surveillance data for the specified time period.

While we face a daunting number of COVID variants, most won't be able to compete against the `fittest' of the bunch, and will fall by the wayside over time.  The variants that are most transmissible, or that can evade (even partially) the protection offered by the vaccine, are the ones most likely to succeed.

Right now B.1.1.7 is firmly in the lead, but it is believed the current crop of vaccines will reasonably well protect against it, meaning it may lose momentum in well vaccinated regions.

What takes its place is anyone's guess at this point. Which is why we continue to watch the less dominant variants with considerable interest.

Posted by Michael Coston at 8:26 AM