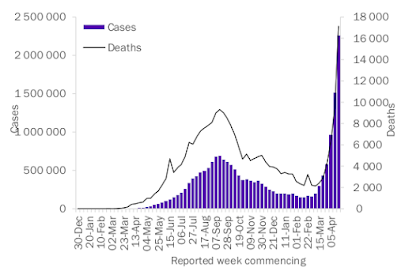 Although it is current only through early last week, the above graphic released by the WHO shows the sharp and sudden rise in COVID cases in the South-East Asia Region (primarily India) quite clearly.
While the daily numbers are believed to be massive undercounts, India has reported 300,000+ cases every day for the past 12 days.

Travel bans from India to the United States, and other countries have been put in effect (see U.S Consulate & Embassies In India: Messaging On COVID Crisis), hospitals are near collapse, and there are anecdotal reports suggesting the daily death toll may be many times higher than officially reported.

While the crisis in India is obvious, less so is the cause.  We've seen reports of several new variants (including B.1.617), but whether (and how) these lineages have a transmission advantage, or are otherwise more biological `fit', remains unknown.

We've been primarily focused on Indian variants carrying the E484Q and L452R mutations, but in late March, in India: MOH Statement On New COVID Variant Detected In 15%-20% Of Samples From Maharashtra) we also saw reports of the N440K variant which has increasingly been found in Kerala.

From the Indian Ministry of Health and Family Welfare report: Genome Sequencing by INSACOG shows variants of concern and a Novel variant in India:

From Kerala 2032 samples (from all 14 districts) have been sequenced. The N440K variant that is associated with immune escape has been found in 123 samples from 11 districts. This variant was earlier found in 33% of samples from Andhra Pradesh, and in 53 of 104 samples from Telangana. This variant has also been reported from 16 other countries including UK, Denmark, Singapore, Japan and Australia. As of now these can be at best said to be variant under investigation.

The N440K variant, however, is not a new arrival in India. It had been repeatedly reported in the second half of 2020 - albeit increasingly in 2021- mostly in Southern India.

Two days ago a preprint article appeared on the BioRxiv server  by researchers from India's Center for Cellular and Molecular Biology (CCMB), which examines the properties of the N440K variant in India, presenting evidence that it imbues SARS-CoV-2 with higher infectious fitness.

As you might imagine, the Indian press has jumped all over this story (see below), although there remain many questions over how much of India's current crisis can be blamed on this particular variant.

N440K, a virulent Covid mutant, is fuelling surge in some states - Times of India

I've reproduced the abstract, and an excerpt from the discussion, below. Follow the link to read the study in its entirety.  I'll have a brief postscript when you return.

Several variants of SARS-CoV-2 have been emerging across the globe, continuing to threaten the efforts to end COVID-19 pandemic. Recent data indicate the prevalence of variants with N440K Spike substitution in several parts of India, which is under the second wave of the pandemic.
Here, we first analyze the prevalence of N440K variants within the sequences submitted from India and identify a rising trend of its spread across various clusters. We then compare the replicative fitness and infectivity of a prototype of this variant with two other previously prevalent strains.

Interestingly, A3i strain showed the highest viral RNA levels, but the lowest infectious titers in the culture supernatants, indicating the absence of correlation between the RNA content and the infectivity of the sample.

N440K mutation has been reported in several viral sequences across India and based on our results, we predict that the higher infectious titers achieved by this strain could possibly lead to its higher rate of transmission. Availability of more sequencing data in the immediate future would help understand the potential spread of this variant in more detail.

RESULTS AND DISCUSSION
N440K variant prevalence has been rising in certain clusters in India
We analyzed the GISAID database (9) for the prevalence of variants containing N440K substitution in Spike. A total of 1555 entries with N440K substitution could be identified  from across the world. Interestingly, India contributed the largest proportion of N440K variants at 33%, followed by the USA and Germany (Figure 1A).

Submissions of sequences from India contributed to 0.86% of the total submissions (Figure 1B). Of the submissions from India, 4.9% sequences contained N440K substitution (Figure 1B). However, when Indian submissions from January 2021 till 24th April 2021 were analyzed, the proportion of N440K substitution significantly went up to 8.82% (Figure 1C).
A further breakdown of the recent data indicates a gradual increase in the representation of this variant with March and April 2021 adding more of this variant that  the previous months (Figure 1D). An increase in the proportion of N440K variant in the  Indian samples is also evident with almost 10% of the sequences submitted in April  2021 carrying this substitution (Figure 1E).
Importantly, higher numbers of submissions with N440K from other parts of the world were seen in the past two months, indicating its rising spread in such countries (Figure 1F). Significantly, these months also saw increased submission of sequences from India.
Karnataka, Maharashtra, Telangana  and Chhattisgarh together contributed to about 50% of these samples indicating the geographically localized spread of this variant in India (Figure 2 A and B). Interestingly,  over 99% of the N440K variants were in the background of D641G substitution, indicating that these variants are in the lineage of A2a strain.
Taken together, the data suggests that the proportion of N440K variant has been increasing gradually and suggesting its improved replicative fitness or increased infectivity.

(Continue . . . .)
This study suggests that the N440K amino acid change - likely in concert with other helpful mutations - may be providing SARS-CoV-2 a replication and/or transmission advantage in parts of India, although how big its contribution is to India's overall COVID crisis is unknown.

Surveillance - which admittedly, may be severely lacking - suggests only about 10% of India's recently (April 2021) sequenced COVID viruses carry the N440K mutation. And as noted, N440K has been reported outside of India as well, and has not been linked to being a huge driver of new cases (yet).

As impressive as the reported 10-fold increase in infectious viral titers over the A2a strain might be, these results were obtained from laboratory experiments using 2 different cell lines (Caco2 and Calu-3) - and while useful for these types of studies - don't necessarily translated to what is happening in the real world.

What this study does do is highlight that the N440K mutation as worthy of our attention, and possible concern, going forward. While its been on our radar for months, it has been overshadowed by other, better known, mutations (D6146. E484K, N501Y, L452R, etc.).

Now that it is in the spotlight, we should learn a good deal more about its contribution to the spread of COVID in the weeks ahead.

Posted by Michael Coston at 8:53 AM