UK SAGE: Can We Predict the Limits of SARS-CoV-2 Variants and their Phenotypic Consequences?

Yesterday the UK's SAGE (Scientific Advisory Group for Emergencies) on COVID released a number of detailed reports on the current SARS-CoV-2 pandemic, and where things might go from here.

While much of it is based on informed speculation - and no one can truly predict what happens next - these reports lay out various plausible scenarios (including many we've discussed recently).

We'll take a deeper dive into some of these reports over the next couple of days, but this data dump includes:

How long will vaccines continue to protect against COVID-19?, 30 July 2021
Paper prepared by academics on vaccine protection for COVID-19.
Updated: 30 July 2021

SPI-M-O: Statement on their concerns for next few months, 14 July 2021
Statement from the Scientific Pandemic Influenza Group on Modelling, Operational sub-group (SPI-M-O) for the Scientific Advisory Group for Emergencies (SAGE).
Updated: 30 July 2021

The first report we'll look at is filed under Long term evolution of SARS-CoV-2, 26 July 2021, but this 15-page PDF is actually titled:

Can we predict the limits of SARS-CoV-2 variants and their phenotypic consequences?

As eradication of SARS-CoV-2 will be unlikely, we have high confidence in stating that there will always be variants. The number of variants will depend on control measures.

We describe hypothetical scenarios by which SARS-CoV-2 could further evolve and acquire, through mutation, phenotypes of concern, which we assess according to possibility. For this purpose, we consider mutations in the ‘body’ of the virus (the viral genes that are expressed in infected cells and control replication and cell response), that might affect virus fitness and disease severity, separately from mutations in the spike glycoprotein that might affect virus transmission and antibody escape.

We assess which scenarios are the most likely and what impact they might have and consider how these scenarios might be mitigated. We provide supporting information based on the evolution of SARS-CoV-2, human and animal coronaviruses as well as drawing parallels with other viruses.

The body of this report then goes on to explore 4 specific scenarios, which range from very bad (a much more lethal virus), to pretty bad (vaccine escape), to good (decreased virulence over time), providing both the rationale and the plausibility for each.

Starting with the worst scenario:

Scenario One: A variant that causes severe disease in a greater proportion of the population than has occurred to date. For example, with similar morbidity/mortality to other zoonotic coronaviruses such as SARS-CoV (~10% case fatality) or MERS-CoV (~35% case fatality).

Despite claiming over 4 million lives (likely a low estimate), we've been a bit lucky in that this COVID pandemic has (so far) been a relatively low-mortality/high morbidity event - at least when compared to  the Case Fatality Rate (but not total deaths) from other coronaviruses like SARS-CoV and MERS-CoV.

COVID's forte is currently transmissibility, not lethality.  But that could change, as this report explains:

This could be caused by:
1. Point mutations or recombination with other host or viral genes. This might occur through a change in SARS-CoV-2 internal genes such as the polymerase proteins or accessory proteins. These genes determine the outcome of infection by affecting the way the virus is sensed by the cell, the speed at which the virus replicates and the anti-viral response of the cell to infection. There is precedent for Coronaviruses (CoVs) to acquire additional genes or sequences from the host, from themselves or from other viruses.
2. By recombination between two VOC or VUIs. One with high drift (change in the spike glycoprotein) from the current spike glycoprotein gene used in the vaccine and the other with a more efficient replication and transmission determined by internal genes, for example, a recombination between beta and alpha or delta variants respectively. Alternatively, recombination may occur between two different variants with two different strategies for overcoming innate immunity, combining to give an additive or synergistic change of phenotype resulting in higher replication of the virus – and potentially increased morbidity and mortality.
Likelihood of genotypic change in internal genes: Likely whilst the circulation of SARSCoV-2 is high.
Likelihood of increased severity phenotype: Realistic possibility.
Impact: High.
Unless there is significant drift in the spike glycoprotein gene sequence, then the current spike glycoprotein-based vaccines are highly likely to continue to provide protection against serious disease. However, an increase in morbidity and mortality would be expected even in the face of vaccination since vaccines do not provide absolute sterilising immunity i.e. they do not fully prevent infection in most individuals.

What can we do?

• Reduce transmission of SARS-CoV-2 within the UK (to reduce risk of point mutations, recombination).

• Minimise introduction of new variants from other territories (to reduce risk of recombination between variants).

• Continue to monitor disease severity associated with variants (to identify changes in phenotype).

• Continue to develop improved prophylactic and therapeutic drugs for SARSCoV-2 and disease symptoms.

While it is always possible that genetic changes that might lead to a more lethal SARS-CoV-2 virus might also trade off some of its transmissibility, there are no guarantees that would happen.

One of the avenues SAGE explores in this section is the potential for a more virulent virus to emerge via reverse zoonosis, something we've covered repeatedly over the past couple of months (see below).

Assuming the virulence/lethality of SARS-CoV-2 doesn't increase over time, the next biggest concern would be a loss of vaccine effectiveness.  While we've seen hints of that, thus far, fully vaccinated individuals appear to enjoy substantial protection against severe illness, hospitalization, and death from COVID. 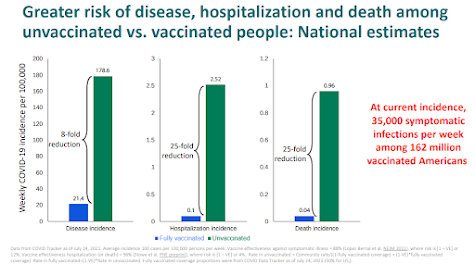 The durability of this protection, and how current vaccines may fare against newer variants, remains unknown.  The SAGE report addresses the various ways that  vaccine escape could happen, and discusses the inevitability of needed updated vaccines.

3. Antigenic ‘shift’: Natural recombination events that insert a different spike gene sequence (or partial sequence) from human CoVs MERS-CoV (highly unlikely due to the low frequency of MERS-CoV infections), or from currently circulating endemic human CoVs (more likely due to the prevalence of these viruses). This would recombine into the ‘body’ of SARS-CoV-2 that is capable of high replication in human cells. The consequence could be a virus that causes disease at a level similar to COVID-19 when it first emerged but against which our current battery of spike glycoprotein-based vaccines would not work.
Likelihood: Realistic possibility.
Impact: High for a completely new spike, medium/low if a spike from a seasonal CoV is introduced since we expect a proportion of the population to have antibodies to these endemic viruses.

What could we do?

In the case of introduction of a completely different spike glycoprotein, a similar vaccine platform could be rapidly employed as has been used successfully on the original Wuhan SARS-CoV-2 and subsequent variants. However, there would be a time lag for roll out whilst these vaccines were generated in sufficient quantities to control and mitigate the effects of infection.
4. A longer-term version of shift whereby SARS-CoV-2 undergoes a reverse zoonotic event into an animal reservoir(s). This virus is then on a separate evolutionary trajectory because the virus animals is subject to different selection processes than in humans. The SARS-CoV-2 decedents then re-emerge into humans at a later time when vaccines that have been updated to keep pace with drift in humans sufficiently mismatched so as not able to provide immunologic cross protection.
Likelihood: Realistic possibility.
Impact: Medium.
What could we do?
Maintain a capacity to make vaccines with updated/different spike protein variants and begin to develop broader CoV immunity in the human population to diverse coronaviruses. For example, begin to develop a universal coronavirus vaccine with strong cross protection to other CoVs potentially using other viral proteins rather than just the spike glycoprotein.
5. Antigenic drift: A gradual or punctuated accumulation of antigenic variation that eventually leads to current vaccine failure. Worst case is that this drift combines with significant antigenic sin (vaccination resulting in an immune response that is dominated by antibodies to previously experienced viruses/vaccines) meaning that it becomes difficult to revaccinate to induce antibodies to the new strains. Genetic and antigenic drift are almost inevitable. Antigenic sin has not yet been reported for SARS-CoV-2 so we consider this possibility less likely.
Likelihood: Almost certain.
Impact: Medium.

OAS (Original Antigenic Sin) is a term coined in 1960 by Thomas Francis, Jr. in his article On the Doctrine of Original Antigenic Sin), where he postulated that when the body’s immune system is exposed to and develops an immunological memory to a specific virus, it may be less able to mount a defense against a subsequent exposure to a second slightly different version of the virus.

This is a complicated (and contentious) topic, which would require a long blog of its own. Luckily we've trod that territory previously here, here, here, and here.

While not as bad as a total vaccine failure, the third scenario addressed by this report is:

Scenario Three: Emergence of a drug resistant variant after anti-viral strategies.
This could be caused by:
6. Emergence of new variants following the administration of directly acting antiviral therapies. As we begin to use directly acting antiviral drugs it is highly likely a variant will be selected that had resistance to individual agents. For example, drugs that target the viral 3C protease, drugs that target the polymerase, monoclonal antibodies that target the spike glycoprotein. If the drugs are used as a mono therapy, then resistant variants have a high probability of emerging. This may render all drugs in that category unusable.

Likelihood: Likely - unless the drugs are used correctly.
Impact: medium unless a scenario arises where drugs are needed more widely.

The fourth, and best case scenario, is unfortunately one that SAGE considers unlikely in the near term.

7. Variants arising with increased transmissibility but decreased pathogenesis/virulence as the virus becomes fully adapted to the human host becoming an endemic infection. Coupled with the likelihood of eventual high populations immunity the infection produces less disease. In other words, this virus will become like other human CoV that causes common colds, but with much less severe disease predominantly in the old or clinically vulnerable.

Likelihood: Unlikely in the short term, realistic possibility in the long term.

You'll want to follow the link to download and read this report in its entirety, as I've only scratched the surface.

Granted, we may not be able to predict what COVID will throw at us next.

But we can't operate under the assumption that after the twists and turns we've seen from COVID over the past 18 months, that it will conveniently dissipate, simply because we are tired of fighting the good fight.

Like it or not, the virus is in control of what happens next.  And with the limited exception of getting vaccinated, and using NPIs, we are pretty much just along for the ride.
Posted by Michael Coston at 8:29 AM