A Little More Information On The Nipah Case In Kerala, India 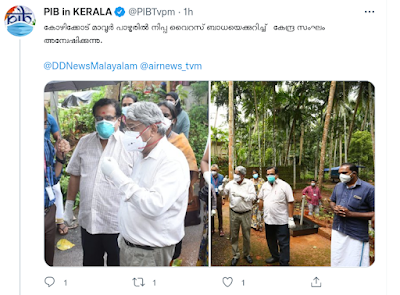 There are numerous news stories appearing overnight in the Indian media regarding the announcement from the their MOH on a Fatal Case of Nipah in Kozhikode district of Kerala, which I reported on in my last blog.

Some media outlets are reporting two `additional cases', while others report two `symptomatic' contacts among healthcare workers, suggesting they have not yet tested positive. The index case - a 12 year old boy - was reportedly taken to multiple hospitals in the days before he died.

From the PIB in KERALA @PIBTvpm - the Official Twitter Account of Press Information Bureau, Govt of India, in Kerala - we get the following (translated) 7-tweet thread, released a little over an hour ago.
As the Nipah virus is carried by fruit bats of the Pteropodidae family - which have a preference for roosting in the tops of trees rather than caves - this allows them to contaminate fruit (and often date juice collection jars) with their virus laden urine and feces.

Past epidemiological investigations have identified the consumption of raw (uncooked) date palm juice in Bangladesh as Nipah’s primary route into the human population. While rambutan fruit - a relative of the lychee - comes from a different type of tree, the same principal could apply.

Once Nipah spills over to a human host, human-to-human transmission is possible.  The Key Facts on Nipah from the WHO:

In March of 2018, in the WHO List Of Blueprint Priority Diseases, the World Health Organization identified at 8 disease threats in need of urgent accelerated research and development.  Among them was the Nipah virus.

In July of 2018, in  IJID: Enhancing Preparation For Large Nipah Outbreaks Beyond Bangladesh, we looked at an open-access article that appeared in the International Journal of Infectious Diseases, that discussed the potential of the Nipah virus producing a large urban epidemic, similar to what we saw in West Africa with Ebola in 2014.

While we've not seen that happen yet, the same could have been said about Ebola prior to 2014.

NEW DELHI, Sept. 5 (Xinhua) -- Indian authorities are stepping up contact tracing after the death of a 12-year-old boy from the Nipah virus on Sunday in the southern Indian state of Kerala, officials said.

According to Kerala's Health Minister Veena George, so far 158 people who came in contact with the victim have been identified.

"Two health workers who came in contact with the 12-year-old boy are also showing symptoms of getting infected by the virus. One of them is a staff employee at the Kozhikode Medical College Hospital, and the other is a staff member at a private hospital in Kozhikode where the boy was under treatment," George told media.

"158 people have been identified who came in contact with the boy, and 20 of them are on the primary contact (high-risk category) list. These 20 will be admitted to the Medical College hospital," he said.

The health department has sounded an alert in Kozhikode, Kannur and Malappuram districts, besides setting up a Nipah control room in Kozhikode.

Officials said one ward at the medical college was being converted into a Nipah ward and Nipah positive patients will be on one floor, while symptomatic people will be treated on another floor of the ward.

George told media that the area where the boy had been living will be declared as a containment zone.

Reports said the area has been sealed off and other localities in its vicinity have been put under lockdown.

The samples of the boy who died early Sunday were sent to the National Institute of Virology in Pune, and a test revealed that he was positive for Nipah.

Kerala has witnessed an outbreak of the Nipah virus in 2018 in Kozhikode and Malappuram districts, which claimed 17 lives.

In 2019, Nipah reappeared in the state's Ernakulam district.

According to the World Health Organization, Nipah virus infection is a newly emerging zoonosis that causes severe disease in both animals and human. The natural host of the virus are fruit bats of the Pteropodidae family, Pteropus genus.

Typically, the human infection presents as an encephalitic syndrome marked by fever, headache, drowsiness, disorientation, mental confusion and coma, which can potentially lead to death. Enditem