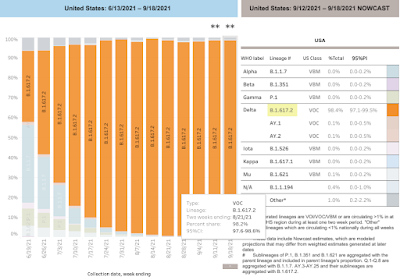 Although the situation varies around the world - in the United States, and much of Europe - the Delta variant remains fully in charge.  Here in the United States - based on representative sampling - more than 99% of all recent cases have come back as Delta (see CDC NOWCAST).

How long Delta remains dominant is unknown.  Alpha seemed insurmountable 6 months ago, but  was swiftly overtaken by Delta in the spring.  Whether another variant can usurp Delta's reign remains to be seen.

Since last December - when Alpha was first deemed a threat by the UK - we've been following an ever expanding and shifting list of VOCs (Variants of Concern), VOIs (Variants of Interest), along with a list of lesser variants that various agencies are monitoring.

While all three variants carry mutations with suspected and/or established phenotypic impacts, the number of reported detections of these variants have decreased over time at the global, regional and country levels. Evidence from both sequencing data submitted to GISAID and information available to WHO indicate a substantial decline in their respective incidence worldwide, and therefore represent diminished public health risks relative to other VOCs and VOIs.

Individual countries, they note, may continue to list these VUMs as VOIs of local interest. Their VOI list still contains:

The revised list of current VOIs now includes Lambda and Mu variants, both circulating in Latin America, where the Delta variant has begun to circulate but has not yet become dominant. The epidemiology of these VOIs, particularly considering the co-circulation of the Delta variant, will continue to be monitored closely.

Alpha, Beta, Gamma, and Delta remain on the WHO's VOC (Variant of Concern) list.

The CDC yesterday announced a new variant category VBM (Variant Being Monitored) which is the functional equivalent of the WHO's VUM.  Wielding a heavy pruning knife, the CDC demoted no fewer than 10 VOIs and VOCs to VBM status (see chart below), leaving only Delta (B.1.617.2 and all AY sublineages) as a Variant of Concern for the United States. 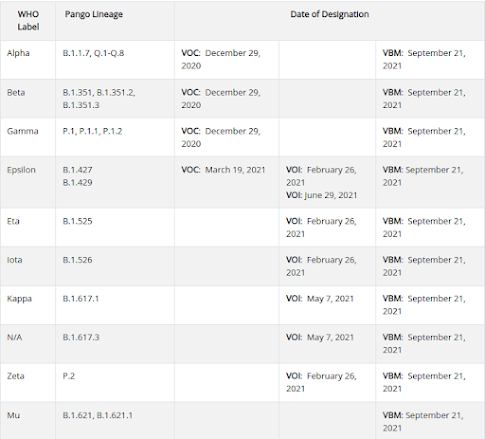 The following excerpt from the CDC's SARS-CoV-2 Variant Classifications and Definitions web page summarizes the changes.

I suspect (but I certainly don't know) that one of the main reasons behind these changes is to get people to concentrate on the immediate threat - which in the United States is clearly Delta - rather than dwell on a long list of variants that may never amount to much.

This may even help vaccine uptake, since endless speculation about the potential future impact of Mu, Lambda, or Gamma in the media have obscured that fact that current vaccines are largely effective against Delta.

Regardless of what category we put them in, emerging COVID variants are going to do whatever they are wont to do. Even when relegated to VBM status, a lot of eyes will remain on these variants, so we are unlikely to be blindsided.

If a recently demoted VOI or VOC begins to make serious inroads, I've no doubt its status will be reevaluated, and elevated if needed.

Posted by Michael Coston at 7:24 AM