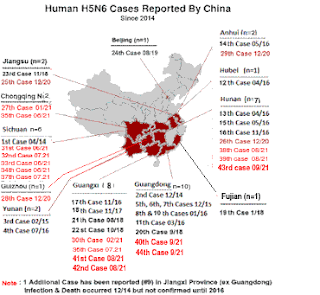 We've another human infection with avian H5N6 announced from China, this time from Dongguan City - located about 90 km from Hong Kong - involving a 53-year old male who is currently hospitalized, although few other details have been released.

This makes China's 20th H5N6 case since late last fall, with the pace of infections picking up over the summer, a time when transmission should be at its lowest.

First, the brief (translated) announcement from the Guangdong Provincial Health Commission, then I'll return with with a postscript.

The Guangdong Provincial Health Commission notified on September 22, 2021 that 1 case of H5N6 was reported in Dongguan City.

Experts judged that the case that appeared this time was an accidental case, and the risk of transmission of the virus is low at this stage. Experts remind: citizens should continue to be vigilant and take the following measures to prevent H5N6 and other bird flu.
Wash your hands frequently: wash your hands after touching poultry, before eating, and after going to the toilet.

To be cooked: poultry and eggs must be cooked before eating.

Seek medical attention early: If you have respiratory symptoms such as fever, cough, headache, and general malaise, you should go to the nearest medical and health institution as soon as possible. If you have been in contact with poultry before, you should take the initiative to tell your doctor.

Do not eat dead poultry meat.

Do not buy poultry and bird products of unknown origin.

Avoid going to live poultry markets as much as possible.

This is China's 44th reported H5N6 infection since the virus emerged in the spring of 2014, and of those, nearly half (n=20) have been reported in the past 10 months. It is also likely that some cases have gone undetected.

This sudden uptick in cases has not gone unnoticed by China's CDC, which over the past two weeks has published two detailed outbreak reports (see below) in their CCDC Weekly.  Both of which have warned that HPAI H5N6 continues to mutate and reassort, and that its threat to public health is increasing.

While H5N6 hasn't shown the ability to transmit efficiently from human-to-human, its high (roughly 50%) Case Fatality Rate - combined with its continual evolution - puts this virus near the top of our avian flu watch list.
Posted by Michael Coston at 10:16 AM