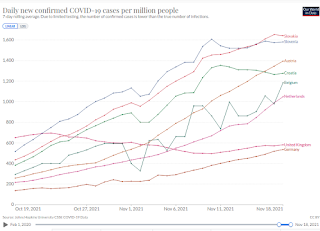 Last 30 Days In Europe - Credit Our World In Data

While Austria is currently in 3rd place among the hardest hit European nations (exceeded only by Slovakia & Slovenia) during this 4th COVID wave, its trajectory (see chart above) is currently the steepest, raising concerns that the worst is yet to come.

A week ago, Austria announced their intention to restrict the activities of the unvaccinated, in hopes of stemming the rising tide of cases, but this morning the Austrian Chancellor announced a nationwide lockdown will go into effect starting Monday (Nov 22nd), and Europe's first national mandatory vaccination policy.

So far, nothing official has been posted on the Austrian government websites, but the European and International press are filled with reports on today's decision. The following report comes from ORF, Austria's public broadcasting TV & Radio network, where you can also find the Chancellor's press conference (German language).

The fourth nationwide lockdown since the beginning of the pandemic is coming: As Federal Chancellor Alexander Schallenberg (ÖVP) and Health Minister Wolfgang Mückstein (Greens) announced in a press conference on Friday morning, the catering, cultural and event industries as well as retail (except shops for daily needs) will close on Monday. Schools and kindergartens should remain open. Vaccination is also mandatory.
Online since today, 10:38 a.m. (Update: 11:54 a.m.)

Mückstein said it was a joint decision. Unfortunately, even as the federal government, one has lagged behind its own claims. "I would like to apologize for this," said the Minister of Health. The lockdown is the very last resort - "a lockdown is always an imposition". It was not a popular decision, "but a necessary one".

Together with Tyrol's governor Günther Platter (ÖVP) and Vienna's mayor Michael Ludwig (SPÖ), the Chancellor and Minister of Health announced further details after the governor's conference. Exit restrictions apply from midnight to midnight for everyone. The lockdown should apply around the clock and in a first step for ten days. After the general lockdown, restrictions on the unvaccinated will remain, according to the government's current plan. The situation will be evaluated after ten days.

Schools and kindergartens should remain open, according to Mückstein. When asked, Schallenberg said that he would appeal to all parents with whom it was possible to leave the children at home. On Thursday, the Ministry of Education published a guide for Salzburg and Upper Austria, which ORF.at has: The timetable should be maintained. Children should be allowed to stay at home without a doctor's certificate. According to the ministry, pupils who are absent from school due to their parents' wish should find out more about the subject matter from the responsible teachers. There should be no area-wide distance learning.

A home office recommendation applies to all employees, 3-G is still mandatory in the workplaces. An FFP2 mask is mandatory in all closed rooms, including at the workplace. Events in the field of top-class sport can continue to take place, but from Monday only without spectators.
General compulsory vaccination from February 1st

A general vaccination requirement is being prepared immediately and should apply from February 1st. Anyone who still does not want to be vaccinated faces administrative penalties. "For a long time there was a consensus in this country that we do not want vaccinations to be compulsory," said Schallenberg. “For a long time, maybe too long” it was assumed that it would be possible to achieve a high vaccination rate even without an obligation. Now you have to face reality.

These are steps that no rational government takes lightly, and it speaks to just how far out of control COVID has become in parts of Europe over the past 30 days. (see yesterday's Germany RKI Reports A Record 65K COVID Cases Yesterday).

There is certain to be heavy public opposition to both the lockdown and the vaccine mandate, but other European nations may face similar difficult decisions in the weeks ahead.

While the United States and Canada are - at least temporarily - far behind Europe in the current rise in COVID cases, the pattern since the beginning of the pandemic has been a large wave in Europe, followed by similar increase in North America.

We'll have to wait to see if that pattern repeats again, but no one should automatically assume  we've seen our last pandemic wave on this side of the pond.

Stay tuned.
Posted by Michael Coston at 6:35 AM