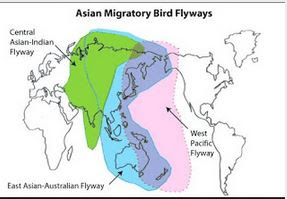 #16,308
The map above highlights one of the most important avian migratory pathways in the world - the East Asian- Australasian Flyway (EAAF) - which is described (below) by the EEAFP (East Asian-Australasian Flyway Partnership), which monitors the arrival and health of migratory birds along the route each year.

The East Asian - Australasian Flyway (EAAF) stretches from the Russian Far East and Alaska, southwards through East Asia and South-east Asia, to Australia and New Zealand and encompasses 22 countries. The EAAF is home to over 50 million migratory waterbirds from over 250  different populations, including 32 globally threatened species and 19 Near Threatened species.

While it has been the source of excitement and wonder for bird lovers every fall for uncounted eons, in recent years this annual southbound trek of migratory birds has also been associated with the arrival and spread of HPAI and LPAI viruses.

Highly Pathogenic Avian Influenza (HPAI) has been very active in Europe since September - but with the exception of some positive environmental samples (e.g. bird feces) - until today poultry farms in both South Korea and Japan have managed to keep the disease out of their flocks this fall.

Overnight Japan reported their first outbreak at an egg-laying chicken farm in Yokote City, Akita Prefecture with roughly 143,000 chickens.  While the subtype is likely H5 (or possibly H7), information surrounding the virus has not been released.
The (translated) announcement from Japan's MAFF (Ministry of Agriculture, Forests, and Fisheries) follows:

Meanwhile, KBS news in South Korea is reporting that nation's 1st confirmed outbreak of HPAI  (identified as H5N1) this fall in a poultry farm - and the investigation of a second farm - in the following translated news report.

As the weather gets colder, highly pathogenic avian influenza is showing signs of re-emergence.

It is known that there are no poultry farms within a 500 m radius of the farm.

The Ministry of Agriculture, Food and Rural Affairs has been setting the range of preventive disposal in proportion to the risk in case of highly pathogenic avian influenza since last month, and the standard for burial disposal until tomorrow (11th) is set for all livestock breeds within 500 meters of the farm where the outbreak occurs.

A duck suspected of highly pathogenic avian influenza was also confirmed at a meat duck farm in Eumseong, North Chungcheong Province, and quarantine authorities are conducting a thorough examination.

Both Japan and South Korea have endured devastating avian epizootics in the past, and avian influenza is endemic in Taiwan further to the south, so this return of avian influenza is not unexpected.  This year, however, there are a couple of new factors involved.

The first is the recognition last spring that H5Nx clade 2.3.4.4b viruses - which were previously viewed as only endangering poultry and wild birds - may be gaining more mammalian adaptations, which could increase their threat to humans (see CDC Adds Zoonotic Avian A/H5N8 To IRAT List).

And the second, is the sudden proliferation of the Asian HPAI H5N6 virus - which has infected more than 2 dozen people in China this year, killing half - and may be among the viral cargo being carried by migratory birds this fall or on their return trip next spring (see CDC Monitoring HPAI H5N6 In China).

Although we've been spared from seeing large avian epizootics in North America since the spring of 2015, we are not immune. Just as in Europe, there is a need to bolster biosecurity here in the United States (see H5Nx: Why North America Must Remain Alert).

While a virus that primarily infects and endangers poultry may seem a small concern right now as we near the two-year mark of our coronavirus pandemic, it is worth remembering that until late 2019 SARS-CoV-2 was a virus that was pretty much exclusive to bats.

The one constant with viruses is change.  And we never know where, or when, the next public health threat will emerge.