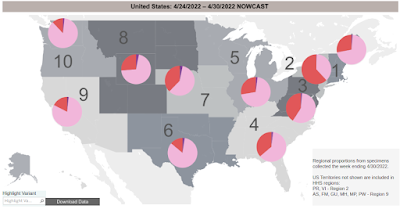 According to this week's Nowcast from the CDC, the percentage of BA.2.12.1 cases continues to climb - but not quite as fast as earlier reports suggested - reaching an estimated 36.5% of U.S. cases last week; up from 28.7% 7 days ago.

The past few week's numbers have been revised slightly, with BA.2 a little higher and BA.2.12.1 a little lower than previously reported.

Still, the general trajectory of the BA.2.12.1 subvariant it upward, and it still appears to be on track to become the dominant strain in the next few weeks, and will likely supplant BA.2 entirely at some point. 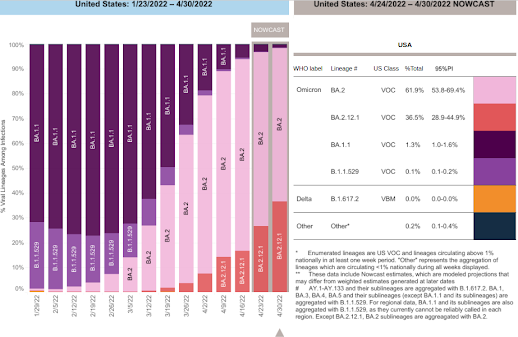 Given the limits of surveillance, testing, and genomic sequencing around the country, all of these numbers should be viewed as rough estimates, and we may see further revisions to the data in the weeks ahead.

We don't have any evidence that BA.2.12 produces any greater severity of illness than BA.2, but we are seeing rising infections in some parts of the nation. So far, however, hospitalization rates remain low.