With the very strong caveat that reduced testing and reporting by countries around the world have likely significantly impacted the numbers, the WHO reports that the number of COVID cases and deaths have  continued to decline since late March. With every recent update, the WHO has advised:

These trends should be interpreted with caution as several countries have been progressively changing COVID--19 testing strategies, resulting in lower overall numbers of tests performed and consequently lower numbers of cases detected.

That said, in many countries - including here in the United States - COVID activity is down markedly, hospitals are no longer overwhelmed, and deaths are a fraction of what they were six months ago.

How long this respite will last is anyone's guess.

This week's WHO update also includes a summary of Vaccine Effectiveness (VE) studies against the Omicron variant, which we'll look at following the global overview. 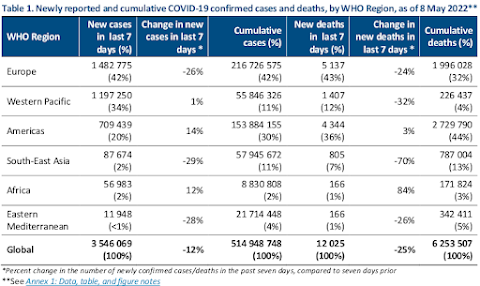 Not unexpectedly, the COVID vaccines developed against the original `wild-type' COVID aren't as effective against the new newer Omicron variants, although they (and their boosters) still provide significant protection against severe illness and death, although their VE wanes over time.

While nowhere near as protective against the Omicron variants as it was against earlier strains, and despite declining protection over time, most of these vaccines (and the mRNA vaccines in particular) still provided valuable protection against severe disease and death.

This study, however, highlights the problem that China faces, since their Sinovac-Coronavac vaccine provides less protection than many of the other vaccines, and many people who received that vaccine did so more than a year ago.

While the effectiveness of COVID vaccines today isn't near what was advertised in early 2021 (95% VE), any protection beats no protection at all.

Which is why I'll be rolling up my sleeve to get my 2nd booster sometime over the summer.