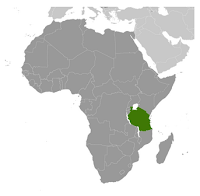 #16,880
Officially, Tanzania has never reported Ebola or Marburg, although in September of 2019 we did see reports of an unidentified febrile disease after a Tanzanian doctor died shortly after returning from neighboring Uganda, reportedly suffering from Ebola-like symptoms (see WHO deploys technical team to Tanzania to support investigation of a rumour of unknown illness).

With no credible explanations for these illnesses offered, many countries called on Tanzania to share any laboratory findings. On September 21st, the WHO issued a remarkably blunt, and highly critical DON (Disease Outbreak News) statement (see Cases of Undiagnosed Febrile Illness – United Republic of Tanzania).

This is a pattern that would be repeated in 2020 and into 2021 (see BMJ Covid-19: Counting the cost of denial in Tanzania), after (now deceased) President John Magufuli halted the release of any COVID statistics in the the summer of 2020, and declared Tanzania `COVID Free' following `3 days of prayer'.

While COVID reporting has improved since Samia Suluhu Hassan took over the Presidency, the cause of the vast majority of deaths in Tanzania - and indeed across much of sub-Saharan Africa - goes unidentified (see WHO report What’s the cause? Certifying deaths in sub-Saharan Africa).

All of which brings us to a new report from the Tanzania Ministry of Health describing an outbreak of an unknown hemorrhagic fever in Lindi, which has resulted in at least 3 deaths.

While details are scant, their newfound openness is a radical departure from the deliberate obfuscations of the past.

Thirteen patients have been diagnosed with an undiagnosed disease in Mbekenyera village, Ruangwa District Council, Lindi Region and three of them have died.
Giving the statement the Chief Government Physician Dr. Aifello Sichalwe today July 13, 2022 in front of journalists in Dodoma region. Dkt. Sichalwe said on July 7, 2022 the Ministry of Health received a report from the Lindi Regional Chief Physician.
He said the report stated that in Ruangwa Council there was an undiagnosed disease from Mbekenyera Health Center where within 3 days (July 5 and 7, 2022) they received 2 patients at the center with symptoms of fever, bleeding (especially nostrils). ) headache and body fatigue.
To monitor the report, the Ministry formed a team of experts from the Department of Emergency Medicine and Disasters, Epidemiology, Chief Government Chemist, Research Institute (NIMR), Muhimbili University of Medical Sciences and Muhimbili National Hospital, joined the team. The region also includes the Department of Corrections. " He said Dr. Sichalwe
The Ministry of Health continues to conduct further epidemiological and clinical investigations while awaiting the results of further tests of the Human and Animal Laboratory Laboratory from the Chief State Chemist.
In addition, the ministry continues to look for other people with symptoms such as early detection and isolation to prevent further spread of the disease, as well as to identify all people who are in contact with patients, patients, and the deceased.
Also, Provide treatment for patients diagnosed with symptoms, advise them to isolate themselves while waiting for the results of laboratory tests, To provide education to the community using various media.
However, the Ministry of Health continues to make preparations for medicines, medical supplies and anti-infective devices to treat victims in the event of emergence.
However, the Ministry has appealed to the people to remain calm while the issue continues to be worked out and the people should continue to use health care facilities when they feel sick.

Once again FluTrackers is maintaining a thread of this outbreak.  Overnight they've posted several media reports suggesting that testing has ruled out Ebola and Marburg, but the cause of these illnesses remains a mystery.

Posted by Michael Coston at 7:59 AM