BA.4.6 is similar to BA.4, which we've been watching for some some, but supposedly is a little better at evading prior immunity. Its estimated prevalence ranges from just over 1% in California and Texas, to over 10% in the American Midwest.

Based on revised estimates published today, BA.4.6 is estimated to have been circulating in the United States for several weeks. While the share of BA.4 and BA.4.6 combined today is estimated as 11.8%, this is actually lower than their combined share of 15% estimated four weeks ago.

BA.4 is declining, while BA.4.6 has gained only a little ground (outside of the Midwest, at least). We'll be watching to see if that trend continues.

The CDC is not yet breaking out BA.2.75, but that shouldn't be taken as evidence that it isn't circulating in the the United States, only that it likely remains at low levels for now.

All evidence suggests that BA.5 (and BA.4) are more likely to evade prior immunity than earlier variants, meaning that even those who have (even recently) recovered from the virus - or have received their booster vaccination - may be at risk of infection.

That said, vaccination (and boosters) - along with prior infection - are still expected to reduce the severity of COVID illness. 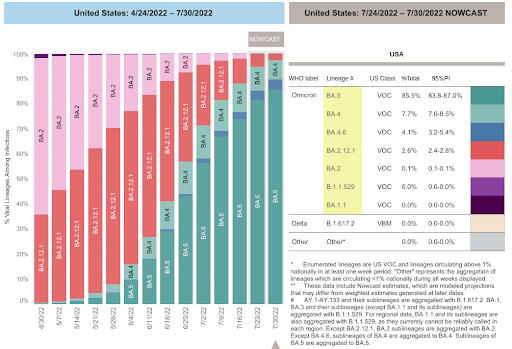 The breakdown by HHS regions follows. 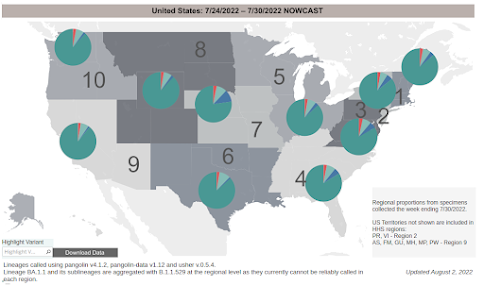 Note: Surveillance, testing, and genomic sequencing are limited (and variable) around the country, so Nowcast numbers should be viewed as rough estimates.
BA.5 has now been the dominant subvariant in the United States for 6 weeks, and so far, we haven't seen anything that appears liable to usurp its reign.

But since they emerged late last year, Omicron subvariants have enjoyed relatively short stays as king of the viral hill; 2 or 3 months at best.

This rapid-replacement cycle has generated fresh waves of infection, and has made it difficult to update booster shots.  A BA.5 component is planned for this fall's booster shot - due sometime in September or October - and so a break in this cycle would be welcome.

Posted by Michael Coston at 4:04 PM