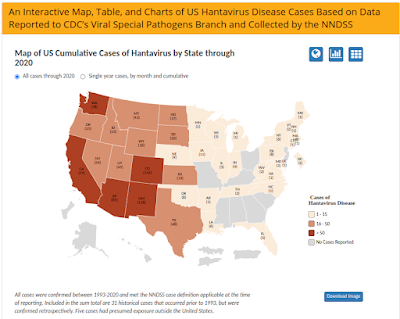 The Sin Nombre virus (SNV), which was first identified in 1993 in the Four Corners region of the American Southwest, is a North American Hantavirus - normally carried by rodents - which carries as much as a 35% Case Fatality rate in humans.

While relatively rare, every year the U.S. reports between 10 and 50 Hantavirus Pulmonary Syndrome (HPS) cases, of which, roughly 35% prove fatal.

Over the past dozen years or so, we've looked in on outbreaks (both in the United States, and around the world) numerous times.

Hantaviruses: Of Mice And Men

HFRS is most common with European, Asian, and African hantaviruses, while HPS is generally seen in the Americas (North, Central and South). As illustrated by the map above, 94% of all known American Hantavirus infections occur west of the Mississippi.

All of which brings us to a dispatch, published this week in the EID Journal, which describes the experimental infection of a six different species of North American rodents with the Sin Nombre virus to determine their ability to carry, and spread, the virus.

Of note, they found that SNV replicated at high levels for extended periods of time in P. Leucopus  (the White-footed Mouse), whose range encompasses much of the Eastern United States.  Since its range over-laps with P. maniculatus - the primary host species for SNV - there are concerns SNV could eventually spread east of the Mississippi.

I've only reproduced some excerpts from the dispatch, so follow the link to read it in its entirety.

Suggested citation for this article 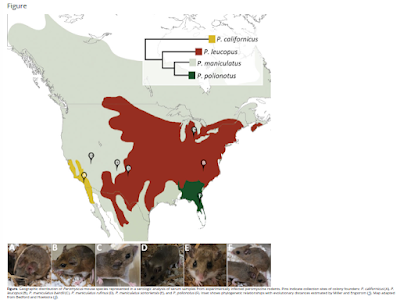 Orthohantaviruses, a genus of enveloped, segmented, negative-sense, single-stranded RNA viruses, are the cause of hantavirus cardiopulmonary syndrome. Hantavirus species are primarily associated and coevolve with specific rodent host species (1,2).
In North America, Sin Nombre virus (SNV) causes most confirmed cases of hantavirus cardiopulmonary syndrome (3) and is primarily maintained in Peromyscus maniculatus deer mice (4). P. maniculatus mice are widely distributed in North America (Figure) and are a complex of subspecies that diverge according to geographic location (2,7). Likewise, SNV and its related viruses are found to diverge in association with their rodent reservoirs (1).
Although host switching is thought to be uncommon in SNV (1,2), other rodent species sharing a geographic site were recently found to carry the virus, potentially acting as additional reservoirs and sources of human infection (8). We evaluated the permissiveness of 6 colony-bred Peromyscus mouse species, whose founders originated from locations across North America, to infection by SNV originating from New Mexico.
(SNIP)
Conclusions

Overall, our data support recent observations from Goodfellow et al. (8) that rodents other than P. maniculatus mice are capable of carrying SNV without showing signs of disease. In that study, wild-caught members of P. boylii mice, Mus musculus mice, and Tamias minimus chipmunks trapped at 2 sites had detectable SNV RNA in their lung tissues. SNV sequences from these rodents were more similar to each other than to previously reported sequences, suggesting circulation of the virus within these rodent populations.

In our study, we experimentally infected 6 Peromyscus mouse species, including 3 that fall under the P. maniculatus species complex, and whose founders originate from locations across North America, with a strain of SNV originating from a single wild-caught animal. Although replicating SNV was detected in animals of all 6 species, permissiveness of each species to SNV infection varied. Susceptibility to SNV infection appears to be multifactorial and is not fully explained by characteristics relating to geographic proximity or genetic relatedness. Given the variability in the patterns of infection between subspecies within P. maniculatus, future studies should consider reporting the subspecies when studying this virus–host relationship.

Furthermore, other Peromyscus mouse species may play an important role in the molecular evolution and transmission of SNV. Host-switching events are thought to give rise to SNV variants and even new hantaviral species (1,2,14). That SNV was capable of replicating to high levels in P. leucopus mice for sustained periods is notable. The geographic distributions of P. maniculatus and P. leucopus mice overlap greatly, presenting opportunities for these 2 populations and their respective viruses to come into contact. Together, these regions cover most of North America, including nearly the entirety of the contiguous United States.

These findings demonstrate the importance of broadening our understanding of the SNV–P. maniculatus virus–host relationship and highlight the benefit of identifying infected and infectious rodent reservoirs at the subspecies level to help elucidate epizootics and spillover events to humans. Furthermore, although distinct eastern and western patterns of genetic evolution have been documented in P. maniculatus rodents and associated strains of SNV in North America (1,2), our study suggests that these patterns might not necessarily prevent western lineages of SNV from emerging into eastern populations of peromyscine rodents.

Ms. Quizon is a laboratory biologist at the Public Health Agency of Canada in Winnipeg. Her primary research interests are zoonoses and the development of diagnostic methods for infectious diseases.