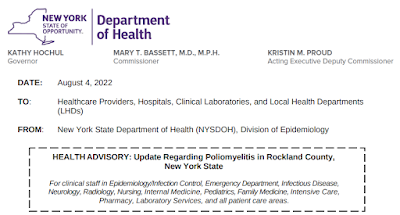 #16,926
Just over two weeks ago the New York State Department of Health announced a single case of Polio was detected in Rockland County - the first in the United States since 2013 - which they described as a vaccine-derived poliovirus (VDPV).

Vaccine-derived polioviruses are a rare downside to using the oral polio vaccine (OPV), which has been discontinued in most western countries for the past 20+ years.

The oral (Sabin) polio vaccine (OPV) contains three attenuated (weakened) polio virus strains that activate an immune response in the body, and for a few weeks causes the weakened virus to be shed in the feces.
This shedding is considered a `good’ side effect, particularly in areas with poor sanitation, as this vaccine-virus can spread in the community for a limited time conveying extra immunity.

But, as the WHO explains, every once in awhile this can go awry.

On rare occasions, if a population is seriously under-immunized, an excreted vaccine-virus can continue to circulate for an extended period of time. The longer it is allowed to survive, the more genetic changes it undergoes. In very rare instances, the vaccine-virus can genetically change into a form that can paralyse – this is what is known as a circulating vaccine-derived poliovirus (cVDPV).

Five days ago New York's DOH issued a statement on their investigation, indicating that polioviruses had been detected in a local wastewater treatment plant, suggesting more people may be infected and shedding the virus.

For perhaps 1 in 4 cases, the virus can cause lesser, non-specific - and non-paralytic - symptoms, including:

For a lucky 75% of cases, polio is a subclinical, and self-limiting illness.  Bur regardless of the presentation, anyone infected can shed the virus for weeks, potentially infecting others.

The assumption is, that for every paralytic case detected, there may be anywhere from 100 to 500 additional undetected cases in the community.  Making every known case just the `tip of the iceberg'.

On Thursday, the New York State DOH issued a new, and quite lengthy (5-page), health advisory following the detection of polioviruses in yet another New York County (see below):

What are the results of the wastewater findings so far?

Wastewater surveillance is an active, ongoing effort that NYSDOH is leading in partnership with local, national, and global public health authorities.

These environmental findings provide further evidence of local—not international—transmission of a poliovirus that can cause paralysis and potential community spread, underscoring the urgency of every New York adult and child getting immunized, especially those in the greater New York metropolitan area.

New Yorkers should know that the latest environmental findings do not indicate that the individual identified in Rockland County was the source of the transmission, and case investigation into the origin of the virus is ongoing. NYSDOH will continue its wastewater surveillance efforts in partnership with CDC, aggressively assess the spread of the virus, and communicate openly with New Yorkers.

Because of this wider detection of poliovirus, the Department of Health has issued a new health advisory which advises:

Healthcare providers should consider polio in the differential diagnosis of patients with sudden onset of limb weakness with history of fever and/or gastrointestinal illness. Providers should especially be on alert for these symptoms in unvaccinated individuals, those currently at increased risk of community transmission, or those with recent international travel or exposures to international travelers.

Under updates since the last advisory, DOH reports:
While most people in the United States are fully vaccinated - and are believed to be well-protected (90%-99%) against polio - there are undoubtedly some who were either never vaccinated, or who have not receive the full regimen of vaccines, and are therefore susceptible.
Healthcare providers, public health officials, and all interested parties will want to download and read the full health advisory (link below):
Posted by Michael Coston at 7:32 AM