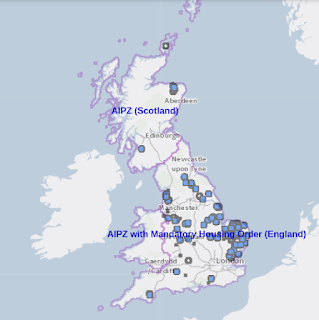 APHA Interactive Avian Influenza Disease Map
#17,140
The UK's current avian epizootic began in earnest in October of 2021 - 14 months ago - with the early arrival of HPAI H5 clade 2.3.4.4b (see DEFRA: HPAI in the UK, and Europe (Preliminary Assessment), which replaced the HPAI H5N8 virus which had appeared sporadically the previous year.
While the 2021-2022 (Oct 1st-Sept 30th) avian flu season would be the worst in UK history, its numbers have been nearly equaled in the opening 60 days of the 2022-2023 flu season. According to DEFRA:

In the United Kingdom, there have been 137 confirmed cases of highly pathogenic avian influenza (HPAI) H5N1 since 1 October 2022:

This only counts captive birds or poultry.  In addition there have been literally hundreds of detections of HPAI in sick or dead wild birds (see list) across the country over the past few weeks.

While reports of human infection with this particular clade of HPAI H5N1 are rare, we are seeing unprecedented levels of the virus in the environment, and the chances for humans to be exposed has increased markedly.

Today the UK's APHA (Animal & Plant Health Agency) has published a technical risk assessment on the threat to human health. HPAI viruses are moving targets, of course - constantly evolving, and occasionally reassorting - which can affect the shelf life of any risk assessment.

While the APHA reassuringly finds `There is no evidence of sustained human-to-human transmission (moderate to high confidence).', they provide a number of caveats, including:

There is insufficient information to judge the risk of asymptomatic or mild disease due to limited testing in human contacts of infected birds.

There is insufficient information to assess the occurrence of limited human-to-human transmission such as transmission within households.

As a result, this assessment states: At present there are no indicators of increasing risk to human health; however, this is a low confidence assessment. They also caution that `The risk assessment is dynamic and requires regular review during this period of unusually high levels of transmission in birds.'

In other words, the news for now is good, but it is subject to change. The full text of the risk assessment follows.

This preliminary risk assessment was undertaken using genomic analysis supplied by the Animal and Plant Health Agency (APHA) and data supplied by academic partners at an ad hoc meeting on 11 November 2022. A full technical group will be convened for ongoing risk assessment.

There is an increase in confirmed cases of influenza A infected birds (high confidence). In 2022, there has been year-round maintenance in indigenous wild birds, which represents a change compared to the usual seasonal pattern in which infections die out over the summer.

Influenza A H5N1 is the predominant influenza virus subtype detected in wild birds and farmed flocks in the UK (high confidence). There is diversity within the UK population of H5N1 viruses with 10 genotypes detected since October 2021, including some reassortment with low pathogenic avian influenza viruses (LPAIVs). The dominant circulating genotypes are currently AIV09 and AIV07-B2. The other currently detected genotype in poultry is AIV48, which includes genes from gull-associated influenza viruses.

Genomic surveillance is proportionate for poultry outbreaks (a genome is generated for every affected premise). There is a limited genomic surveillance sample size in wild birds, although distributed in time and space. Genomic data lags 7 to 10 days behind date of sample collection for poultry.

Extent of human exposure in the UK

Owing to the disease burden in birds, there is an increased interface between humans and infected birds (high confidence). The high number of wild birds and domestic flocks with influenza A infection also increases the likelihood of human exposures to this virus without personal protective equipment (moderate confidence).

Propensity to cause mammalian and human infection

Available surveillance data does not suggest widespread mammalian adaptation of this virus (low to moderate confidence).

Known mammalian adaptation mutations are infrequent in the available genomic data from avian viruses. There is evidence of direct spillover from birds into some mammalian species. The species affected (foxes, otters and seals) are presumed to have direct high-level exposure to infected birds based on feeding behaviour and food preferences. Few mammalian infections have been detected. The 8 available influenza genomes from these positive mammals all show the PB2 E627K substitution. This mutation is known to be acquired rapidly after infection of a mammalian host in some influenza viruses and is associated with enhanced polymerase activity.

The rapid and consistent acquisition of the PB2 mutation in mammals may imply this virus has a propensity to cause zoonotic infections and further assessment should be made of the properties of this mutation. There is an unconfirmed recent report of possible transmission between mink in Spain. Genomic data from the mink is urgently required if this is confirmed.

There is incomplete genotype to phenotype understanding and genomic data must be supplemented by in vitro and animal model studies.

There have been 4 instances of influenza A H5N1 2.3.4.4b detection in humans (one in the UK, one in the US, and 2 in Spain). There is limited asymptomatic testing of human contacts of bird cases in the UK and international surveillance is variable. Nevertheless, by comparison with other zoonotic infections including influenza viruses, this data suggests that zoonotic infections are not frequent (low confidence).

There are no detected severe human cases associated with influenza A H5N1 (clade 2.3.4.4b) in the UK or internationally. There is insufficient information to judge the risk of asymptomatic or mild disease due to limited testing in human contacts of infected birds.

The avian epidemic has passed the triggers for undertaking enhanced characterisation and surveillance. At present there are no indicators of increasing risk to human health; however, this is a low confidence assessment. The risk assessment is dynamic and requires regular review during this period of unusually high levels of transmission in birds. In vitro and animal model data is required, and detailed sentinel human infection surveillance is recommended.

Provisional triggers proposed by the ad hoc expert group are:

Posted by Michael Coston at 3:19 PM