This morning’s `official’ case count from the WHO (World Health Organization) now shows nearly 800 infections.   No one, of course, believes that this represents the total number of infected around the world.

These are simply `laboratory confirmed cases’.

Later today we’ll get a new total from the CDC, but as that agency has been warning for several days, we need to pay less attention to the numbers and focus instead on the trends.


First, the WHO update.

Further information on the situation will be available on the WHO website on a regular basis.

When we talk about `lab confirmed cases’ it is important to realize that those are just the tip of the iceberg – or in this case – the top of the pyramid. 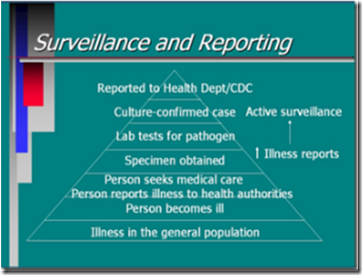 Depending on the severity of the illness, the general availability of medical care and surveillance, and the accuracy of the tests  official case counts may reflect 20%, 10%, 1% or even less of the total number of cases in a community.

As an example, in a typical flu season it is estimated that about  10% of Americans – about 30 million people – get influenza.  But during that flu season, the NREVSS and WHO collaborating laboratories here in the US only test a couple of hundred thousand samples.

So, out of 30 million cases each year, the CDC only reports about 30,000 laboratory confirmed cases.

Confirming about 1 out of every 1000 suspected cases in the community.

They still provide trends, and can help show where the virus is appearing, but they don’t accurately reflect the prevalence of the virus in any community.

There are also problems with the testing itself.

Ideally all lab tests would be 100% reliable and accurate.  In actual practice, that just doesn’t happen.

Samples must be collected properly, and the time from onset of illness - and individual physiologies – will affect the amount of virus being shed.

Both can negatively affect the ability of a test to detect the influenza virus.

The first test, usually applied in a doctor’s office when someone presents with ILI (Influenza-like-Illness) is a rapid Influenza test.

In order for most samples to be `sent up the chain’ for additional testing, a patient must first test positive for influenza A using a rapid test kit.

This rapid test is designed to show if someone tests positive for the Influenza A or B virus, but generally not the type.

According to the CDC:

The rapid tests vary in terms of sensitivity and specificity when compared with viral culture or RT-PCR. Product insert information and research publications indicate that:

Sensitivity is defined as the ability of a test to correctly identify individuals who have a given disease or condition.

So, based on the manufacturer’s claims, these tests only detect the influenza virus 50% to 70% of the time.

Worst case (50%), it’s not much better than flipping a coin.

Specificity is defined as the ability of a test to exclude someone from having a disease or illness.

That means that if you test 100 people, who do not have influenza, somewhere between 5% and 10% of the tests will come back with a false-positive.

I’ve not seen any statement regarding the sensitivity and specificity of the new A/H1N1 detection kits being distributed by the CDC to all States and to other countries.

Since this is a new test, using newly developed reagents specifically for this virus, it may simply be too early to have good statistics.

PCR testing is generally pretty reliable, as long as the samples were properly taken and shipped.

Degradation of samples during shipping, or while waiting in the queue for testing, sometimes results in an unreliable test.

Of course, even with these difficulties, the testing and surveillance in the developed world is far better than it is in many developing countries.

So these case counts, while worth reporting, shouldn’t be viewed as anything more than an indication of the the spread of the A/H1N1 virus.

And with laboratory results running (best case) 4 or 5 days behind – we are actually seeing a snapshot of the conditions as they were a week ago.

Reporters, however, must continually `feed the beast’ with new stories, and angles, 24 hours a day.   And the `beast’ is voracious.

With the Internet, and cable TV, the news cycle is no longer 24 hours (as it was during the heyday of newspapers).

It is now measured in minutes.  The pressure for reporters to come up with a `new angle’, and new material is enormous.

So we are seeing a great many `speculative’ news articles, filled with opinions and guesses, based on the latest snapshot of data from the CDC and the WHO.

Data that these organizations admit is often out of date before they post it.

Overnight, the buzz word out of Mexico is `stabilization’ of the situation.  Reporters are now saying that Mexico is bringing the outbreak under control.

Perhaps that’s true.   Or perhaps not.

Divining a trend, based on one or two days worth of (incomplete) data, is always dangerous.

Before declaring victory in Mexico, let’s see what happens when the restrictions are lifted, and people begin to interact with one another.

We could easily see another spike in illness out of Mexico a week from now.

Anyone who thinks they know how this A/H1N1 outbreak will turn out a week, or a month, or a year from now is simply guessing.

Something to keep in mind when you read the latest `expert analysis’ or prediction in the news.

Posted by Michael Coston at 8:40 AM