The number of confirmed cases in Japan are increasing rapidly, going from just 4 yesterday morning, to 8 last night, to 28 this morning.

Other news reports put the number in excess of 40.  These numbers are changing almost by the hour.

More than 500 schools, day care centers, and kindergartens have been ordered closed in order to slow the spread of the virus, and a number of festivals have been canceled as well.

Japan is part of the WHO (World Health Organizations) Western Pacific region.  So far, only the Region of the Americas have `documented’ community spread of the virus, although many believe the virus is spreading rapidly in other regions. 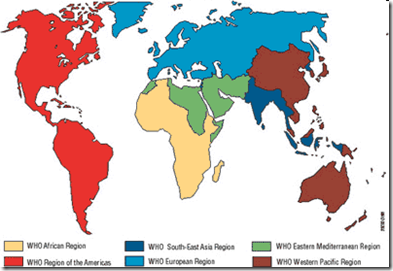 Should the number Japanese confirmed cases continue to rise the WHO may find it increasingly difficult to keep from raising the pandemic alert level.

Tokyo - Japan on Sunday reported a total of 28 confirmed cases of the H1N1 influenza known as swine flu.

The latest cases involved pupils and teachers from the prefectures of Osaka and neighbouring Hyogo who tested positive for the virus.

Around 570 schools and kindergartens in the affected areas were shut, the Kyodo news agency reported, quoting authorities.

Osaka governor, Toru Hashimoto, urged on the population to take preventative measures such as washing hands and wearing masks. He also called for calm, saying his government would do everything it could to combat the spread of the virus.

The AP is reporting a total of 44 cases, with this terse news flash.

Posted by Michael Coston at 8:02 AM