The desire to get home when you are sick, or even when you fear you might be starting to fall ill, can be enormous.

Home is where your family, your friends, and your doctor are close at hand.   Home is where people speak the same language, and have the same customs.

If you are going to be sick, the last place you want it to be is in another city . . .or worse, another country.

For some, there is the extra complication that their medical insurance may not be valid outside of their own country as well.

And so it was probably naïve not to expect that some people during a pandemic wouldn’t try every trick in the book to get home.  Even if they suspected they might be infected.

Today, we learn from this Reuters report that a number of sick passengers flying into Ho Chi Minh City in Vietnam took fever reducers (Aspirin, Tylenol, etc) several hours prior to arrival in order to beat the thermal scanners.

First the article, then some discussion about the difficulties of keeping a virus like influenza out of a country.

"That's why when they passed through the airport, the body temperature scanners skipped them," Chau said.

Vietnam has confirmed 26 people infected with H1N1 flu, 23 of whom came by air after travelling in the United States or Australia. Three others fell sick after coming in contact with the infected travellers.

The country requires inbound passengers found with fever to be isolated for seven days.

Several months ago I posted a fascinating video simulation showing International Airline flights over a 24-hour day.The name of the blog was How The Next Pandemic Will Arrive.

Epidemiologists have long figured that commercial airliners would prove efficient at dispersing a new pathogen globally. Watch the 1 minute video below, and you can readily see why. 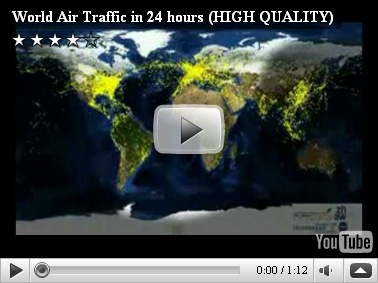 The video above, which as been making the rounds for several months, was made by ZHAW (Zürcher Hochschule für Angewandte Wissenschaften) or The Zurich University of Applied Sciences.

Every year there are more than 17,000,000 commercial airline flights (data from year 2000 - it's probably higher now) that carry hundreds of millions of passengers each year.

In order to try to interdict those passengers who might be feverish, and therefore potentially infected with a pandemic virus, many airports have installed thermal scanners – like the one pictured above – that scan the skin temperature of arriving passengers.


The theory is, those who have fevers can be examined, and isolated if need be.

But these high tech scanners have limitations (see Study: Effectiveness Of Non-Contact Infrared Temperature Screening), as  Helen Branswell of the Canadian Press told us last February.

TORONTO — Using temperature scanners in airports to try to identify and block entry of sick travellers during a disease outbreak is unlikely to achieve the desired goal, a report by French public health officials suggests.

Their analysis, based on a review of studies on temperature screening efforts like those instituted during the 2003 SARS outbreak, says the programs may be of limited use in the early days of a flu pandemic, when governments might be tempted to order screening of incoming travellers to try to delay introduction of the illness within their borders.

Aside from the problem of deliberately taking fever reducers in order to beat the scanners, since SARS and Influenza both have an incubation period of (generally) 1 to 4 days, it is very likely that visitors could arrive before they show signs of a fever.

And there are limits to the technology as well.

The study referenced above makes the following points that lend to a lack of sensitivity of the NCITs (non-contact infrared thermometers).

All of this shows the extreme difficulty any country would have in keeping a pandemic virus away from their shores.  Short of completely sealing off their nation – for months or even years – it is probably impossible.

It may be possible to limit the number of viral introductions into a society by utilizing thermal scanners and other methods, and thereby slow the spread of a disease.   Officials might buy days or even weeks in that way.

That’s something that we may learn more about from the real-world tests going on right now.

But hopes that you could prevent the entry of an influenza virus into a country are pretty dim.