While we awaits tests on 3 pigs suspected of having had the H1N1 virus in Minnesota, Norway is now reporting that at least 14 pig farms have tested positive for the swine flu virus.


Dutchy over on FluTrackers, along with Anty, Treyfish, and several other newshounds have been tracking, and translating news articles on this emerging story for more than a week.

You can read the history, and follow the future progress here.

Early in the outbreak, when it appeared to be localized to only 1 or 2 farms, there were attempts to slaughter infected herds to prevent further spread of the virus.  With the ongoing spread, culling has been abandoned.

This latest report was posted and translated by Dutchy.


Sick people infect pigs with H1N1 influenza in Norway, where 14 farms are now suffering from the dreaded virus.

Sick people infect pigs with H1N1 influenza in Norway, where 14 farms are now suffering from the dreaded virus.

Previously, the infection was limited to North-Trøndelag, which is an area in central Norway. But now there is also found sick pigs in two herds further south in Buskerud and Rogaland.


In total there are proven influenza infection in 14 herds, and took 34 samples.


- It is not surprising that we find infected herds in other parts of the country, said supervisory director in Mattilsynet, Kristina Landsverk.
It is humans, which infects pigs, and Mattilsynet think it may be difficult to restrict the disease, when people across the country are infected with H1N1.


Inspectorate notes that the disease can not be fought with slaughter of pigs and establishment of control zones.

Overnight ProMed Mail  sent out an update on the H1N1 outbreak among swine in Norway, with excerpts from news reports and this summation:

[Norway reported to the OIE, so far, 3 H1N1 outbreaks on pig farms.
The initial, immediate notification was submitted on 12 Oct 2009; follow-up reports were submitted on 13 and 16 Oct 2009; all 3, including a map, are available at

“More herds in the district are infected though not all of them have been tested and confirmed as having the pandemic influenza A (H1N1) 2009 variant. No animal contact between this herd and the 2 first confirmed cases. The virus seems to be extremely contagious between humans and pigs. On 15 October, we decided to abandon our attempt at culling infected herds."

The underlying concern, of course, is that swine are susceptible to a wide variety of influenza viruses, and are thought to make excellent `mixing vessels’ for influenza stains. 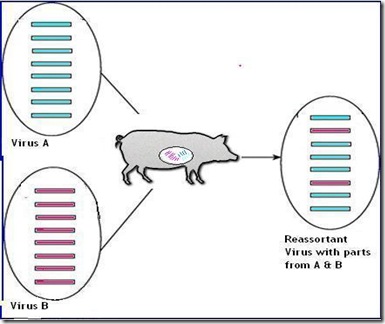 Although the odds of it happening are probably very low, the worry is that a pig could be infected by two different influenza strains simultaneous, and a mixing – or reassortment – of the viruses could take place.

The result could be a new, or mutated, flu virus.

While reassortments do happen - ending up with a biologically `fit’ virus well enough adapted to humans to spread easily - is a pretty rare event.

The novel H1N1 virus we are now dealing with undoubtedly came about through a series of such reassortments, but it also circulated (and mutated) in pigs for years before making that successful jump to humans.


Meanwhile, some hog farmers here in the US are reportedly reluctant to test their herds (see Swine Flu: Don’t Test, Don’t Tell) out of fears that the discovery of swine flu would further depress pork sales.