But in truth, I’d happily settle for being able to write about science and medicine as well as does Maryn McKenna.

This is not a recent revelation, as I’ve been a avid fan of Maryn’s work for several years. But it was reinforced this past Friday with the arrival of Maryn’s book  Superbug: The Fatal Menace of MRSA, which I’ve been eagerly devouring.

MRSA is a fatal menace, and and as you read this narrative of its spread, you soon realize that calling it a `Superbug’ is totally appropriate. 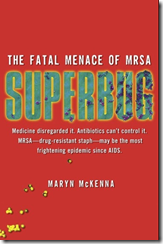 While chock full of scientific information, Superbug reads more like a fast-paced medical thriller than a science book.  Maryn writes so vividly, that when she takes you into the ICU (which is often), you can all but smell the antiseptic.

Superbug manages to deliver an enormous amount of scientific data almost painlessly by incorporating it into the stories of people (and their families) that MRSA has devastated, or those are trying to understand and stop its spread.

I can think of a great many superlatives to describe this book; engaging, harrowing, fascinating, powerful . . .  even terrifying at times.

But the descriptive term that keeps coming back to me is:

There is probably no graver health threat facing the world today than the rise of antibiotic resistant pathogens.  And it isn’t just MRSA.  There’s VRSA, VRE, VISA, Acinetobacter and others.

The way we use (and misuse) antibiotics in humans, and on the farm, plays a huge role in our ability to deal with infections today and in the future.   As Maryn points out, we need to make changes in hospital procedures, community health care, farming practices, prisons, and antibiotic awareness if we are to combat these emerging superbugs.

Much as Upton Sinclair’s The Jungle exposed the meatpacking industry and Rachel Carson’s Silent Spring alerted us to man-made threats to our environment, Maryn McKenna’s Superbug should be viewed as a clarion call for changes we must make if we hope to control this rapidly growing health threat.

I am chagrined to confess that even though I’ve been aware of MRSA for years, have read about it often, and even recently lost a relative to MRSA pneumonia  - until I read this book -- I’ve not really appreciated just how profound a threat that antibacterial resistant pathogens pose to mankind.

MRSA kills at least 19,000 Americans every year, hospitalizes hundreds of thousands more, and causes millions of visits to doctors and emergency rooms.  It adds tens of billions to our health care costs, and the human costs are incalculable.

MRSA, and other resistant pathogens, are evolving faster than our ability to create new classes of antibiotics to combat them.  As Maryn reports, the only viable solution may be the creation of a vaccine against staph. But developing a vaccine will require time, enormous funding, and the political will to make it happen.

All of which are in short supply.

Superbug, quite frankly, should be required reading for every doctor, nurse, and health care professional, if for no other reason than to alert them to the changes they must make in order to help curb the spread of these deadly pathogens.

But it should also be on the reading list of parents, students, and teachers who need to be able to recognize the early warning signs of infection.

And just as importantly, read by those who make policy at the local, state, and Federal level.  We either make institutional changes or risk serious peril from these resistant bacteria.

This is a book I will keep, and I am certain, will re-read and refer to often.  Even if you don’t normally read  `science books’,  you should take the time to read this one.

Superbug is not only a fascinating book, it’s an important one.

Full Disclosure:   While I’ve never met Maryn McKenna in person, we did talk once on the telephone (she interviewed me in 2007 for a CIDRAP News story), and we’ve exchanged a number of emails and twitter communications over the years.

So I consider her a friend as well as a blogging colleague.

I ordered my copy of SUPERBUG from Amazon in early January . Several days afterward, Maryn offered to send me a publishers advance copy, which arrived in my mailbox on Friday.

I will keep my paid-for copy when it arrives, and pass the gratis copy I received on to a Health Care Professional I know to be interested in the subject.