Influenza Activity in the United States continues well below what might be normally expected this time of year, as shown by this week’s FluView report. 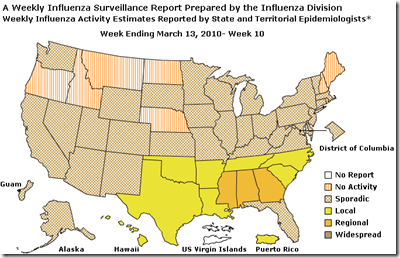 While pandemic influenza activity in the US is at a very low level, according to the World Health Organization’s latest report (Pandemic Update 92):

For the full report of the latest US data, visit the weekly FluView  update page.  Here are a few excerpts.

During week 10 (March 7-13, 2010), influenza activity remained at approximately the same levels as last week in the U.S.

WHO and NREVSS collaborating laboratories located in all 50 states and Washington, D.C. report to CDC the number of respiratory specimens tested for influenza and the number positive by influenza type and subtype. The results of tests performed during the current week are summarized in the table below. 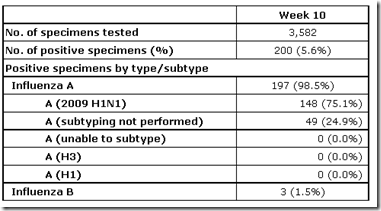 During week 10, 7.3% of all deaths reported through the 122-Cities Mortality Reporting System were due to P&I. This percentage was below the epidemic threshold of 7.9% for week 10.

Nationwide during week 10, 1.8% of patient visits reported through the U.S. Outpatient Influenza-like Illness Surveillance Network (ILINet) were due to influenza-like illness (ILI). This percentage is below the national baseline of 2.3%.