Master Of Its Binding Domain

With one pandemic virus still smoldering in the background, and another one – H5N1 – potentially still in the wings (sitting at pre-pandemic Level III and holding), the question on many scientist’s minds is: what would it take for bird flu to become a pandemic?

Researchers at Erasmus MC (Medical Center) in Rotterdam are among those trying to answer that question.

In an article that appears in the current issue of the Journal of Virology, they detail their findings that a single amino acid substitution may be all that is required to make H5N1 better adapted to the human respiratory system.

First, a little background (I’m keeping this very simple. My apologies to any real scientists reading this - you may wish to avert your eyes), then the research abstract.

There are three criteria for an influenza virus to become a pandemic.

The H5N1 virus has met the first two criteria, but (thankfully) has not yet adapted well enough to humans to spread easily between them.

Although there may be other factors at work, the virus’s main obstacle is believed to be H5N1’s affinity for avian α2-3 linked sialic acid receptor cells rather than for the α2-6 linked sialic acid cells commonly found in the human respiratory system.


Humans do possess α2-3 receptor cells, but mostly deep in the lungs or in the human gut, areas where the virus has trouble reaching.

For a virus to have a good shot at transmission, it needs to be able to bind to cells in the upper respiratory system.

A virus’s ability to bind to specific cells is controlled by its RBD or Receptor Binding Domain; an area of its genetic code that allows it to attach to, and infect, specific types of host cells. 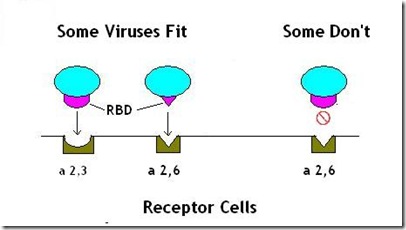 Like a key into a padlock, the RBD must `fit’ in order to open the cell to infection.

For some deeper background you may wish to read Looking For the Sweet Spot, and a follow-up blog called Receptor Binding Domains:Take Two.

The genetic sequence of the flu virus can be represented by the letters of the amino acids that make up the viral genome. These are long chains comprised of hundreds of amino acid molecules.

As the virus inhabits a cell, and begins to replicate, it makes thousands of copies of itself which then burst out of the cell after a few hours and go on to infect other cells.

Those cells, in turn, make copies that go forth to infect more cells.

But being a single-strand RNA virus, the influenza virus tends to be sloppy in making copies of itself. Errors sometimes creep in. If in the process of replicating it mixes up just a single amino acid, we can end up with a mutated virus.

Above, I’ve swapped out the amino acid Glutamic acid (E) at position 5 for Lysine (K). Assuming the result is a `biologically fit’ and competitive virus (most aren’t), then it may go on to infect other cells, and conceivably, other hosts.

Or it may simply have no effect at all.

These small changes in the virus are called antigenic drift, and over time changes in the virus can accumulate to the point that last year’s vaccine is no longer effective.  They can also bring about antiviral resistance, or even increase the virulence or transmissibility of the virus.

Big jumps, or mutations in the virus generally come about through a process called reassortment.  And that happens when two different flu strains inhabit the same host (human or otherwise) at the same time.

They can swap gene segments and thereby produce a hybrid virus. 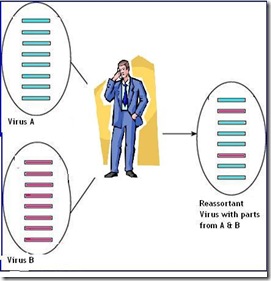 The point being that influenza viruses are constantly changing, evolving, and mutating through a variety of processes, not all of which are well understood.

The H5N1 bird flu virus that appeared in Hong Kong in 1996 now has now mutated into well over a dozen different clades (branches of their genetic tree), and more are expected to form over time. 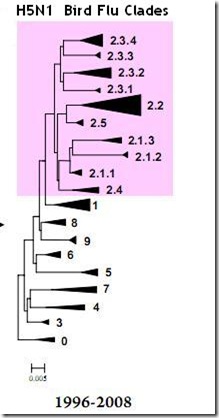 Which should be enough background for us to now look at the work conducted by researchers at Erasmus MC, (including such familiar names as Ab Osterhaus and Ron Fouchier).

Here is the abstract (it’s a pay-to view article), slightly reformatted and reparagraphed for readability.

In vitro assessment of attachment pattern and replication efficiency of H5N1 influenza A viruses with altered receptor specificity.

The continuous circulation of the highly pathogenic avian influenza (HPAI) H5N1 virus has been a cause of great concern.

The possibility of this virus acquiring specificity for the human influenza A virus receptor, alpha2,6-linked sialic acids (SA), and being able to transmit efficiently among humans is a constant threat to human health.

Different studies have described amino acid substitutions in hemagglutinin (HA) of clinical HPAI H5N1 isolates or that were introduced experimentally, that resulted in an increased, but not exclusive, binding of these virus strains to alpha2,6-linked SA.

Here, we have introduced all previously described amino acid substitutions and combinations thereof into a single genetic background, influenza virus A/Indonesia/5/05 HA and tested the receptor specificity of these 27 mutant viruses.

These data show that influenza virus A/Indonesia/5/05 potentially requires only a single amino acid substitution to acquire human receptor specificity, while at the same time remaining replication competent, thus suggesting that the pandemic threat posed by HPAI H5N1 is far from diminished.

Since I haven’t seen the whole article (and honestly would be unlikely to understand it all, even if I had), I can’t really comment on the specifics of this study.

The take-away message here is that there are a number of routes by which bird flu could become a more human-adapted pathogen.  Some may require as little as one amino acid substitution.


The unanswerable question right now is whether this substitution ever will occur in nature and spark an H5N1 pandemic.

The best scientists can say is that it is possible.

And with a virus that’s exhibited the kind of mortality rate that we’ve seen with bird flu, that’s more than enough to keep them awake at night.

Posted by Michael Coston at 7:48 AM