Study: Prior Immunity And Pandemic Waves

One of the great mysteries about influenza pandemics is why illness seems to come in waves, sometimes separated by months with little or no flu activity.

The 1918 pandemic appeared in many regions as three separate waves.  A milder wave during the spring and summer of 1918, followed by an intense and very deadly wave in the fall, and  a return of the following spring. 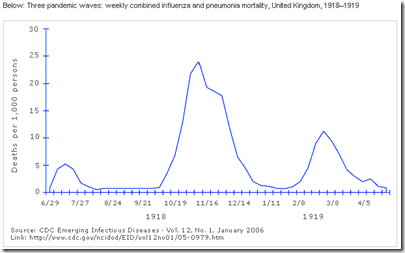 
Again in 1957, and in 1968, we saw pandemic influenza come in repeated waves, but the exact reason why the virus should flare, infect some – but not all – then recede for months only to return,  has never been adequately explained.

Today from BMC Infectious Diseases we get this open access research articles where the authors postulate that pre-existing immunity from exposure to previous influenza’s may have been partially protective to selected (largely urban) populations during the 1918 pandemic, which may help explain the wave phenomenon.

Here is the abstract, and this link will take you to the provisional PDF.

The ecology of influenza may be more complex than is usually assumed. For example, despite multiple waves in the influenza pandemic of 1918-19, many people in urban locations were apparently unaffected. Were they unexposed, or protected by pre-existing cross-immunity in the first wave, by acquired immunity in later waves, or were their infections asymptomatic?

We modelled all these possibilities to estimate parameters to best explain patterns of repeat attacks in 24,706 individuals potentially exposed to summer, autumn and winter waves in 12 English populations during the 1918-9 pandemic.

Before the summer wave, we estimated that only 52% of persons (95% credibility estimates 41-66%) were susceptible, with the remainder protected by prior immunity. Most people were exposed, as virus transmissibility was high with R0 credibility estimates of 3.10-6.74. Because of prior immunity, estimates of effective R at the start of the summer wave were lower at 1.57-3.96. Only 25-66% of exposed and susceptible persons reported symptoms. After each wave, 33-65% of protected persons became susceptible again before the next wave through waning immunity or antigenic drift. Estimated rates of prior immunity were less in younger populations (19-59%) than in adult populations (38-66%), and tended to lapse more frequently in the young (49-92%) than in adults (34-76%).

Our model for pandemic influenza in 1918-9 suggests that pre-existing immune protection, presumably induced by prior exposure to seasonal influenza, may have limited the pandemic attack-rate in urban populations, while the waning of that protection likely contributed to recurrence of pandemic waves in exposed cities. In contrast, in isolated populations, pandemic attack rates in 1918-9 were much higher than in cities, presumably because prior immunity was less in populations with infrequent prior exposure to seasonal influenza.

Although these conclusions cannot be verified by direct measurements of historical immune mechanisms, our modelling inferences from 1918-9 suggest that the spread of the influenza A (H1N1) 2009 pandemic has also been limited by immunity from prior exposure to seasonal influenza. Components of that immunity, which are measurable, may be short-lived, and not necessarily correlated with levels of HI antibody.

Posted by Michael Coston at 2:19 PM