While it is a distinction often lost on the public, doctors know that during the height of every flu season the majority of patients reporting `flu-like symptoms’ likely have something other than influenza.

Even during the opening weeks and months of the H1N1 pandemic of 2009, a large percentage – perhaps even a majority – of people who either thought (or they were told) they had `swine flu’, had something else.

In October of 2009, during the height of the fall wave of the H1N1 pandemic, I posted the following graphic on my blog. 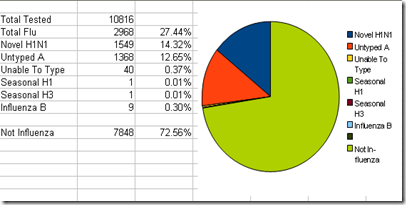 ILIs or Influenza-Like Illnesses, like adenovirus, parainfluenza, rhinovirus and others are often indistinguishable from influenza without laboratory tests.

Most of the time, it doesn’t matter much.

Unless there are serious complications – often exacerbated by pre-existing medical conditions - viral illnesses generally resolve themselves after a few days without medical intervention.

Which is why doctors don’t automatically run expensive and time consuming lab tests on every `flu’ patient that shows up a their door.

The odds are, the patient will have recovered before the results come back.

But during a pandemic, when rapid decisions must be made regarding patient isolation and the administration of antivirals, things become more complicated.

We’ve a new study appearing in BMC Infectious Diseases that looks at laboratory testing on thousands of people clinically diagnosed with `H1N1 Swine Flu’ in Scotland during the opening months (April-July) of the 2009 outbreak.

It turns out that of the more than 16,000 patients tested for the H1N1 virus by the West of Scotland Specialist Virology Centre (WoSSVC) in Glasgow over a 4 month period, only 9% were actually positive for the Swine flu virus.

Despite the broad scope and sensitivity of these lab tests, more than 70% of those patients diagnosed with the swine flu tested negative for any of the above listed respiratory illnesses.

First a link to the study (open access), and then I’ll return with a little more.

During the summer 2009 outbreak of "swine flu" in Scotland what respiratory pathogens were diagnosed as H1N1/2009?

During the April-July 2009 outbreak of H1N1/2009 in scotland the West of Scotland Specialist Virology Centre (WoSSVC) in Glasgow tested >16 000 clinical samples for H1N1/2009. Most were from patients clinically diagnosed with H1N1/2009. Out of these, 9% were positive. This study sought to determine what respiratory pathogens were misdiagnosed as cases of H1N1/2009 during this time.

We examined the results from 3247 samples which were sent to the laboratory during April-July 2009. All were from patients clinically diagnosed as having H1N1/2009 (based on accepted criteria) and all were given a full respiratory screen using real time reverse transcriptase polymerase chain reaction (rtRT-PCR) assays.

This study highlights the problems of using a clinical algorithm to detect H1N1/2009. Clinicians frequently misdiagnosed common respiratory pathogens as H1N1/2009 during the spring/summer outbreak in Scotland. Many undesirable consequences would have resulted, relating to treatment, infection control, and public health surveillance.

The complete article is available as a provisional PDF. The fully formatted PDF and HTML versions are in production.

You may be wondering about the 70% of these samples that tested negative for any respiratory pathogen.

Apart from giving us a better insight into the spectrum of non-flu viruses in circulation (even in the summer), this study highlights the need for rapid and reliable in-office flu tests during a pandemic.

Clinical diagnostic algorithms may be useful, are limited in their ability exclude non-pandemic viral illnesses.