BMJ: No Substantial Link Between Flu Vaccines And Guillain-Barre Syndrome 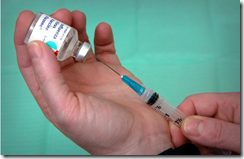 The supposed link between flu vaccines and Guillain-Barre Syndrome (GBS) goes back to the 1976 swine flu scare and vaccination drive, where it was estimated that roughly 1 in 100,000 vaccine recipients developed the neurological disorder.

The vaccination program was halted after 40 million Americans received the vaccine, several hundred developed GBS, and the expected pandemic failed to show.

I was a young paramedic at the time, and chronicled my part in that bit of influenza history some time ago in Deja Flu, All Over Again.

In the years since, while there has been little or no evidence of flu shots causing GBS, there remains a palpable level of public concern over vaccines – fears that anti-vaccine activists have played heavily upon in recent years.

The CDC, along with many other public health agencies, have allowed that the flu vaccine might carry with it a very low risk of developing GBS.

But most years the incidence is so low (perhaps 1 in 500,000 or 1 in a million) as to be nearly impossible to measure.

This from the CDC’s Guillain-Barré syndrome (GBS)  Q&A page.

Many things can cause GBS; about two-thirds of people who develop GBS symptoms do so several days or weeks after they have been sick with diarrhea or a respiratory illness. Infection with the bacterium Campylobacter jejuni is one of the most common risk factors for GBS.

People also can develop GBS after having the flu or other infections (such as cytomegalovirus and Epstein Barr virus). On very rare occasions, they may develop GBS in the days or weeks after getting a vaccination.

Which brings us to a new study appearing yesterday in the BMJ (British Medical Journal) that looks at adjuvanted and unadjuvanted vaccine recipients across 5 European countries in 2009, and once again finds `no substantial link’ between taking the vaccine and GBS.

First some excerpts from the study, then I’ll return with more.

Objective To assess the association between pandemic influenza A (H1N1) 2009 vaccine and Guillain-Barré syndrome.

Participants 104 patients with Guillain-Barré syndrome and its variant Miller-Fisher syndrome matched to one or more controls. Case status was classified according to the Brighton Collaboration definition. Controls were matched to cases on age, sex, index date, and country.

Conclusions The risk of occurrence of Guillain-Barré syndrome is not increased after pandemic influenza vaccine, although the upper limit does not exclude a potential increase in risk up to 2.7-fold or three excess cases per one million vaccinated people.

The authors conclude by stating:

Adjuvanted pandemic influenza A (H1N1) 2009 vaccines did not increase the risk of Guillain-Barré syndrome substantially, if at all.

While this study cannot state with absolute scientific certainty that the 2009 pandemic flu vaccine never caused a single case of GBS, they were unable to find any compelling statistical evidence that it did.

The qualifier of a `substantial link’  is used because, quite frankly, once you get down to an incidence rate as low as 2 or 3 cases out of a million, adverse effects can be almost impossible to detect.

Since viral infections can spark GBS, this study found that vaccination may actually have prevented some cases of Guillain Barre Syndrome – although those numbers are also too low to effectively measure.

Just under a year ago, in Lancet: The Influenza - Guillain Barré Syndrome Connection I wrote about a study where the authors stated that the risks of contracting GBS from the vaccine appear to be minor compared to the risks of developing GBS from catching the flu virus itself.

Like all studies, this BMJ study was subject to certain limitations, and additional studies are underway.  It is, however, the latest in a long list of reassuring research on the safety of flu vaccines.

Of course, no vaccine (or drug) can be said to be 100% safe – and so rare but sometimes serious adverse effects have been reported.

As an example, there is an investigation in Europe into a possible link between the Pandemrix vaccine and a small number of cases of narcolepsy.

But then, even over-the-counter aspirin and NSAIDs contribute to thousands of hospitalizations and deaths each year.

It’s all about relative risks.

And the risks from getting influenza – which kills tens of thousands every year - far exceed whatever slim risks that might be posed by getting the flu shot.

For more reassuring research on the safety profile of modern flu vaccines, you may wish to revisit the following blogs:

The preponderance of evidence continues to support the scientific consensus that flu vaccines are very safe and most years, reasonably effective.