The old adage is true.

Bacteria learn to resist antibiotics, viruses learn to ignore antivirals and drift antigenically to evade vaccines, and eventually your neighbor’s dog learns how to burrow under your fence to get at your prized petunias.

Adaptation is the lynchpin of evolutionary survival, often making victories against bacteria, viruses, and other pests fleeting at best.

Today Declan Butler writing for Nature News, brings us details of another battlefront where the pests are making gains against our modern technology; growing insecticide resistance among malarial mosquitoes in Africa.

It’s a good article, so I won’t bother excerpting it.  Follow the link to read it in its entirety.

For more background on this growing problem, the World Health Organization has produced a 46 page report called The Technical Basis for Coordinated Action Against Insecticide Resistance. 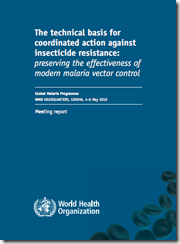