The Path Of Increased Resistance 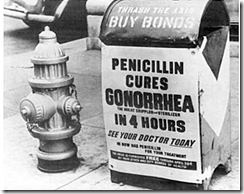 True in the 1940s, but sadly, no longer the case – Photo Credit scdhec.gov

From yesterday’s MMWR, a report that illustrates just how tenuous our victories over bacterial foes can be – a review of the rise of antibiotic resistant Neisseria gonorrhoeae in the United States over the past 10 years.

Despite 70 years of effective antibiotic treatment for this sexually transmitted disease, it remains the second most common STD in the United States.  The CDC  estimates that more than 700,000 persons in the U.S. contract gonorrhea each year, although less than half of those infections are reported to CDC.

For information on the disease itself, the CDC maintains a FAQ page (Gonorrhea - CDC Fact Sheet).

The introduction of penicillin in the 1940s represented the first truly effective treatment for this scourge.  And for roughly 30 years, penicillin and tetracycline both proved effective weapons against this disease.


But by the 1970s penicillin/tetracycline resistant forms of Neisseria gonorrhoeae began to appear in the United States, and by the 1980s had become common.  In response, the CDC began recommending cephalosporins as the first-line treatment for gonorrhea.

In 1993, the CDC also recommended the use of fluoroquinolones (i.e., ciprofloxacin, ofloxacin, or levofloxacin) to treat gonorrhea, as they were relatively cheap, effective, and allowed for a 1 dose treatment.

In 2007, the CDC announced Fluoroquinolones No Longer Recommended for Treatment of Gonococcal Infections, leaving just one class of antibiotics - the cephalosporins -still recommended and available for the treatment of gonorrhea.

Today, a combination therapy of a cephalosporin (cefixime or ceftriaxone), along with a macrolide antibiotic (preferably azithromycin) are the only recommended treatments for Gonorrhea.

But, as the past history has taught us – given enough time – bacterial pathogens often manage to evolve resistance to whatever antibiotics we use against them.

And yesterday’s MMWR report suggests that may be happening with our last line of defense against this STD.


While treatment failures have not been reported in the United States (a handful have been reported in Asia, and Europe) – CDC researchers are finding that gonorrhea isolates are showing a need for higher doses of our last remaining antibiotic.


The editorial note with this statement compares the pattern of this growing resistance to what was seen a decade ago with the rise of quinolone resistant gonorrhea.

The epidemiologic pattern of cephalosporin susceptibility in the West and among MSM during 2009--2010 is similar to that previously observed during the emergence of fluoroquinolone-resistant N. gonorrhoeae in the United States (2--3,7). Although the history of fluoroquinolone-resistant N. gonorrhoeae might not predict the patterns of decreasing cephalosporin susceptibility, the observed trends are concerning.

The bottom line, again from the editorial comment is:

In light of the diminished resources available to STD control programs and the past inability to prevent emergence of resistance, the eventual emergence of cephalosporin resistance appears likely.

Although the NIH is investigating the use of existing drugs in the treatment of gonorrhea, new classes of antibiotics are desperately needed in the long run.

Unfortunately, it can take more than a decade, and an investment of hundreds of millions of dollars, to create, test, and get approval of a new class of antibiotic.

And even if those considerable hurdles are successfully overcome, the effective life of the drug may be short, as bacteria are proven masters at evolving antibiotic resistance.


The bottom line is that antibiotics – as vital as they are for our health – are relatively poor investments for most drug companies.

The real money is in drugs that treat chronic conditions, something people take for years, not just for a couple of weeks.

And so the future for the development of  new antibiotics – at least over the next decade or two – looks bleak.

So, for the time being, health care providers are urged to:

This path of increased resistance isn’t restricted to Neisseria gonorrhoeae, of course.The list of resistant bacteria is long and continues to expand, including such high profile pathogens as MRSA, NDM-1, KPC, EHEC.

While the end of the antibiotic era is not yet at hand, the fear is - without new drugs and the proper stewardship of the ones we already have - we may be drawing closer to that day.

A few of my recent blogs on the subject include:

Posted by Michael Coston at 8:25 AM