Although we generally talk about the H5N1 bird flu as if it were a single entity – in reality there have been more than a dozen clades of the virus identified - with numerous variants within each clade.

You can see an overview of the evolution of the H5N1 virus over the years in the graphic below. 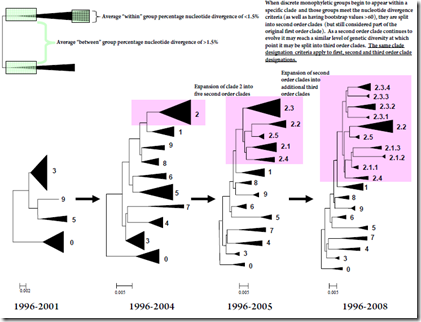 For more on this evolution see Variations On A Bird Flu Theme.

H5N1, like all influenza A viruses, is constantly under pressure to change and mutate, looking for a biological advantage. Most of these mutations, thankfully, are evolutionary dead ends and fail to spread and thrive.

But in this viral version of king-of-the-hill, nature occasionally produces a more `fit’ and competitive virus, and it begins to dominate and spread.

One of these `new’ clades making inroads over the past few years has been 2.3.2.  I wrote of the spread of this emerging clade earlier this year in What Goes Around, Comes Around and EID Journal: H5N1 Branching Out).

Somewhat ominously, last Spring we began to see reports of poultry vaccine failures in Vietnam due to the spread of a mutated version this clade (further classified as clade 2.3.2.1).

In late May Vietnam announced a cessation of poultry vaccinations until a new formulation could be developed (see Reuters Vietnam halts bird flu vaccination due to new type).

Which brings us to a press release, issued today by the United Nation’s Food and Agriculture Organization (FAO), warning of a possible resurgence of the H5N1 virus this fall and winter, in part due to the emergence and spread of this new clade of the virus.

29 August 2011, Rome - FAO today urged heightened readiness and surveillance against a possible major resurgence of the H5N1 Highly Pathogenic Avian Influenza amid signs that a mutant strain of the deadly Bird Flu virus is spreading in Asia and beyond, with unpredictable risks to human health.

The H5N1 virus has infected 565 people since it first appeared in 2003, killing 331 of them, according to WHO figures. The latest death occurred earlier this month in Cambodia, which has registered eight cases of human infection this year -- all of them fatal.

Since 2003 H5N1 has killed or forced the culling of more than 400 million domestic poultry and caused an estimated $20 billion of economic damage across the globe before it was eliminated from most of the 63 countries infected at its peak in 2006.

However, the virus remained endemic in six nations, although the number of outbreaks in domestic poultry and wild bird populations shrank steadily from an annual peak of 4000 to just 302 in mid 2008. But outbreaks have risen progressively since, with almost 800 cases recorded in 2010-2011.

Virus spread in both poultry and wild birds

At the same time, 2008 marked the beginning of renewed geographic expansion of the H5N1 virus both in poultry and wild birds.

The advance appears to be associated with migratory bird movements, according to FAO Chief Veterinary Officer Juan Lubroth. He said migrations help the virus travel over long distances, so that H5N1 has in the past 24 months shown up in poultry or wild birds in countries that had been virus-free for several years.

"Wild birds may introduce the virus, but peoples' actions in poultry production and marketing spread it," Lubroth noted.

Recently affected areas are to be found in Israel and the Palestinian Territories, Bulgaria, Romania, Nepal and Mongolia.

A further cause for concern, Lubroth said, is the appearance in China and Viet Nam of a variant virus apparently able to sidestep the defences provided by existing vaccines.

In Viet Nam, which suspended its springtime poultry vaccination campaign this year, most of the northern and central parts of the country -- where H5N1 is endemic -- have been invaded by the new virus strain, known as H5N1 - 2.3.2.1.

Viet Nam's veterinary services are on high alert and reportedly considering a novel, targeted vaccination campaign this fall. Virus circulation in Viet Nam poses a direct threat to Cambodia, Thailand and Malaysia as well as endangering the Korean peninsula and Japan further afield. Wild bird migration can also spread the virus to other continents.

"The general departure from the progressive decline observed in 2004-2008 could mean that there will be a flareup of H5N1 this fall and winter, with people unexpectedly finding the virus in their backyard," Lubroth said.

The countries where H5N1 is still firmly entrenched – Bangladesh, China, Egypt, India, Indonesia and Vietnam – are likely to face the biggest problems but no country can consider itself safe, he said.

"Preparedness and surveillance remain essential," Lubroth underlined. "This is no time for complacency. No one can let their guard down with H5N1."

For now H5N1 is primarily a threat to poultry.

The virus remains poorly adapted to human physiology, and despite ample opportunities in places like Egypt and Indonesia, only causes rare, sporadic infections.

The concern, of course, is that over time that may change.  And so the world remains at Pre-pandemic Phase III for the H5N1 virus, and we continue to watch for signs that the virus is adapting to humans. 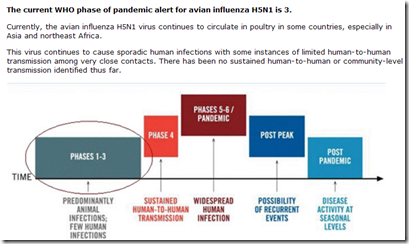 But H5N1 is not the only pandemic threat in the wings.

We’ve seen scattered human infections by avian H7, H9, and H11 viruses, along with rare swine flu reassortments in recent years. We could even see an increase in virulence among the human influenzas already in circulation.

While we worry most about the H5N1 virus – primarily due to its high mortality rate – nature’s laboratory continues to experiment with a growing variety of viral options.

Which is why the question it isn’t `if’ another pandemic will happen.

It’s pretty much just a matter of when.

Posted by Michael Coston at 6:30 AM