The Furor Over H5N1 Research Continues 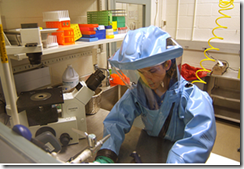 Over the weekend the New York Times / International Herald Tribune ran a scathing editorial weighing in on the recent debate over H5N1 bird flu research called An Engineered Doomsday.

As you have doubtless heard by now, Ron Fouchier of Erasmus University Medical Center in the Netherlands announced the creation of an airborne H5N1 strain (in ferrets, anyway) last August at a medical conference in Malta (see Katherine Harmon’s Sci-Am article and in a follow up to this story in New Scientist: Five Easy Mutations).

Halfway across the world, Yoshihiro Kawaoka, a highly respected virologist at the University of Wisconsin-Madison School of Veterinary Medicine announced the creation of a comparable H5N1 super flu at roughly the same time.

In November alarm bells were raised by bio-terrorism experts, who warned that this information in the wrong hands could be catastrophic (see NPR: Bio-Terrorism Concerns Over Bird Flu Research).

The National Science Advisory Board for Biosecurity (NSABB) was asked to review Fouchier’s work to ascertain whether it was too sensitive to publish, and in December they recommended that only a redacted version of the work be released.

NSABB recommended that the general conclusions highlighting the novel outcome be published, but that the manuscripts not include the methodological and other details that could enable replication of the experiments by those who would seek to do harm.

This weekend a  NYT’s editorial called for the destruction of this new H5N1 strain (or turning it over to an few government-controlled laboratories BSL-4 containment facilities). They also questioned, given the dangers involved, whether this sort of research should have been permitted in the first place.

Given the influence that an editorial from the NYTs carries, it is only fair to present some dissenting views.  Below you’ll find links to three of them.

Yesterday Professor Vincent Racaniello posted a response to this editorial on his website.  You’ll find that a vigorous debate continues in the comment section.

N.Y. Times: H5N1 ferret research should not have been done

Next an opinion piece by author and journalist Peter Christian Hall that appears on the Reuters The Great Debate analysis and opinion page.

As a biological weapon, H5N1 is for the birds

And lastly, a report from the Milwaukee-Wisconsin Journal Sentinel Online, where a professor who oversees bio-safety operations at the University of Wisconsin-Madison defends the work (and safety) of H5N1 research conducted by Yoshihiro Kawaoka.

By Karen Herzog of the Journal Sentinel

This debate is far from over, and the decisions ultimately reached could have far-reaching effects. For more on all of this you may wish to revisit some earlier blogs on the subject, including:

The Biosecurity Debate On H5N1 Research