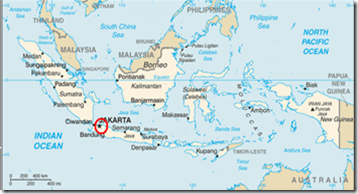 Ten days ago we learned of the death of a 23 year-old man living in north Jakarta from the H5N1 virus, presumably contracted from pigeons he was raising (see Bird Flu Suspect Dies In Indonesia).

At the time, there were media reports that this man’s sibling (ASR, age 5) was also ill and hospitalized, but it was reported on January 9th that he/she tested negative for the H5N1 virus.

Health authorities in Jakarta on Monday gave the 5-year-old brother of a young man who recently died of bird flu a clean bill of health.
The toddler, identified only as A.S.R., was hospitalized with a fever and cough on Saturday, the same day his 23-year-old brother, P.D.Y., died of the disease.

We know that testing for the H5N1 virus has always been difficult, particularly once a patient is placed on antivirals, and we’ve seen some cases where patients tested negative repeatedly up until their demise, and bird flu infection was only established post-mortem.

Which is why many observers of the bird flu situation in Indonesia take negative test results with a grain of salt.

Today, via a statement released from the Indonesian Ministry of Health (h/t Gert van der Hoek on FluTrackers), we now learn that a 5 year old girl from the same neighborhood (with exposure to pigeons) has died after testing positive for the virus on January 13th.

Most of the details match those of the 5 year-old referenced above (excluding gender), so it seems likely they are one in the same. Hopefully we’ll get a clarification of gender, and exact relationship to the first victim (if any), when the WHO updates this case.

The following is a machine translation from the Sehat Negeriku (Healthy Country) website maintained by the Ministry of Health’s Center for Public Communication. While a lengthy update, conspicuous by its absence is any direct mention of the first fatality, the 23 year old who died on January 7th.

Ministry of Health, through the Directorate General of Disease Control and Environmental Health announced a new case of H5N1 have been confirmed by the Center for Biomedical and Health The basic technology, Health Research Agency.

The case on behalf of the U.S. (female, 5 years) who Tanjung Priok, North Jakarta, Jakarta Province. U.S. surveillance teams discovered during investigations in the region on January 7, 2012. He experienced symptoms of fever since the day before and was referred to the department of Friendship. The U.S. immediately get in the intensive care isolation room, according to the administration of examinations suspect bird flu.

On January 13, 2012, the patient experienced shortness of breath, and performed medical acts in accordance with procedures. At that time examination Polymirasea Chain Reaction (PCR), virus-infected patients tested positive for H5N1. Because of his condition continued to decline, eventually the patient died on January 16, 2012 at around 2:00 pm.

Based on the epidemiological investigation into the patient's house and the surrounding environment by Kemenkes Team and the local health office, and obtained the relevant information that is often brought into the workplace workshop PD (bird flu positive patients) where there are domesticated pigeons, are often invited to the ranch owned by friends of pigeons PD, and are often given food without washing hands after holding a dove.

With the increase of these cases, the cumulative number of bird flu in Indonesia since 2005 until this news broadcast is 184 cases with 152 deaths.

Director General of Disease Control and Environmental Health (PP and PL), Prof. dr. Tjandra Yoga Aditama, Sp (K), MARS, DTM & H, DTCE, vocal point as the International Health Regulations (IHR) have also been informed of this case to the WHO.

Although we continue to see isolated human infections around the world, for now H5N1 is primarily a threat to poultry.

The virus remains poorly adapted to human physiology, and despite ample opportunities in places like Egypt and Indonesia, only causes rare, sporadic infections.

Still, with 20+ clades of the virus out there, continually mutating and adapting, the concern is that one of these days the virus will figure out how to infect humans efficiently.

So we watch these isolated cases with considerable interest, looking for any signs of enhanced transmission.

Arkanoid Legent - one of the best newshounds on the net - has an update from the Antara News agency which indicates this latest victim is the niece (translated as nephew) of the first fatality.


" Ministry of Health (Kemkes) in a statement here on Thursday, said the death of the girl with the initials AS (5) on Monday (16 / 1) is positive for bird flu.


AS is the nephew of PD (23) who died on January 7, 2012 ago and also tested positive for bird flu and the two alleged victims have contracted the H5N1 virus from the same source of pet birds PD.

"Since entering the hospital, AS have been given help and given medication, but is this bird flu death rate is quite high," said Director General of Disease Control and Environmental Health (P2PL) Tjandra Yoga Aditama when contacted by AFP on Thursday."