WHO Updates H5N1 In Egypt & Indonesia

The World Health Organization has posted updates on the Indonesian fatality I blogged about this morning (see Indonesian MOH Announces Bird Flu Fatality), along with two new cases of H5N1 infection in Egypt.

First, the Indonesian case where the girl is listed simply as a `family contact’ of case # 183.

19 January 2012 - The Ministry of Health of Indonesia has announced one new confirmed case of human infection with avian influenza A(H5N1) virus.

The case is a 5 year-old female from Jakarta Province. She was identified by a surveillance team during an investigation in the area on 7 January 2012 and was referred to a hospital. On 13 January 2012, she had breathing difficulties. Her condition deteriorated and she died on 16 January 2012.

Epidemiological investigation indicated that she was a family contact of case 183, and frequently had direct contact with the same pigeons as that case, and the same household environment.

Surveillance of other contacts has not identified further cases.

Of the 184 cases confirmed to date in Indonesia, 152 have been fatal.

Next stop, Egypt, where the MOH has reported two new cases.

19 January 2012 - The Ministry of Health and Population of Egypt has notified WHO of two cases of human infection with avian influenza A (H5N1) virus.‪

The first case is a 2 year-old female from Cairo Governorate. She visited Helwan Fever Hospital as an outpatient on 30 October 2011 with symptoms of influenza-like-illness (ILI). The case was confirmed by RT-PCR at the Central Public Health Laboratory through periodic testing of samples collected from ILI outpatients from sentinel ILI surveillance sites.

The epidemiological team investigated the case after confirmation of the laboratory test. Retrospective investigation through data collected from her family identified a positive history of exposure to backyard poultry. Samples from the case have been sent to the US Naval Medical Research Unit No. 3 (NAMRU-3) for further sequencing.

The second case is a 31 year-old male from Fayium governorate. He developed symptoms on 1 January 2012, received oseltamivir on 14 January 2012 and is still hospitalised under the critical care unit. The case was confirmed by the Central Public Health Laboratory, a National Influenza Center of the WHO Global Influenza Surveillance Network.

Epidemiological investigations into both the cases indicated that they had exposure to backyard poultry.

Of the 159 cases confirmed to date in Egypt, 55 have been fatal.


A bit unusually, the first case appears to have been treated as an outpatient, and was not hospitalized. Her infection was picked up later as part of a routine screening of samples collected from sentinel ILI surveillance sites.

Egypt has case fatality rate among known H5N1 cases  of about 35% - which is less than half that reported by Indonesia (82%). It is fair to assume that surveillance doesn’t pick up every case, so these numbers may be artificially inflated.

Whether the difference between these two regions is due to the varying strains that are circulating, more vigilant surveillance in Egypt, or differences in medical care is difficult to know.

This trend was particularly noticeable during the first half of 2009, when a string of about a dozen toddlers were found to have contracted what appeared to be a milder form of the H5N1 virus.

The CFR dropped (temporarily) to about 10%.

While a milder form of bird flu might sound like a good thing, several top virologists have warned that it might signal a better adaptation to human physiology.

Back in 2009, Dr. Robert Webster of St Jude Children’s Research Hospital and Dr. John Oxford of of Queen Mary, University of London – both expressed concern over the trend in Egypt (see Meanwhile, Back In Egypt . . .).

As these sporadic cases continue to trickle in, it is worth remembering that the world remains at Pre-pandemic Phase III on the H5N1 virus.  Which is why we continue to watch for signs that the virus is adapting better to humans. 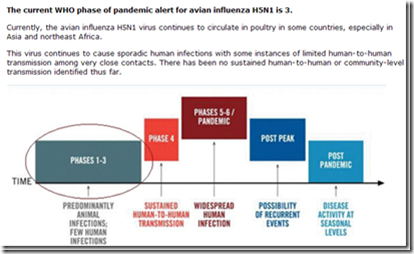