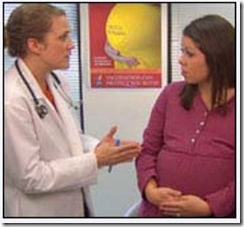 One of the persistent myths on the internet is that the 2009 H1N1 vaccine was responsible for `thousands’ of miscarriages. One need only Google `Vaccine + Miscarriage’ to see some of the propaganda out there.

It is a sad but true statistic that in the United States about 1 million women experience a miscarriage every year. That works out to be about 2,500  miscarriages each day.

And if we could vaccinate all of the pregnant women in the country today, tomorrow 2500 would still miscarry.

And most would probably blame the vaccine.

There is no such thing as a 100% benign drug, and so the possibility exists that a vaccine could produce serious adverse side effects. Which is why monitoring systems like VAERS are utilized to try to detect any spike in adverse effects from vaccines.

Over the past 3 years we’ve seen very encouraging reports on the safety of the 2009 pandemic vaccine. Last October in Lancet: Guillain-Barré Syndrome & H1N1 Vaccine In Children) we learned:

In fact, the VAERS report cited above found 0 deaths they could link to the pandemic Vaccine. Meanwhile, during the same period the CDC estimated that at least 12,000 (mostly younger) Americans died from the flu.

And today, in the BMJ, we’ve another study of a large cohort of pregnant women in Demark that reassuringly finds no increase in miscarriage among those who received the 2009 H1N1 vaccine.

Vaccination against pandemic A/H1N1 2009 influenza in pregnancy and risk of fetal death: cohort study in Denmark

Conclusion This large cohort study found no evidence of an increased risk of fetal death associated with exposure to an adjuvanted pandemic A/H1N1 2009 influenza vaccine during pregnancy.

This latest study closely matches the findings of other researchers, such as we saw in  Hong Kong: No Increase In Fetal Death Among Vaccine Recipients.

Ironically, while some seek to demonize the flu vaccine as causing fetal deaths, in October of last year in UK: Pregnancy And Swine Flu a study conducted at Oxford University by the National Perinatal Epidemiology unit found a strong link between infection with the 2009 `swine’ flu and an increased number of stillbirths.

Fetal deaths among women infected with the H1N1 virus were 5 times higher than normal.

Very early into the 2009 H1N1 outbreak – even before the declaration of a pandemic by the World Health Organization – it became apparent that pregnant women were making up a disproportionate number of ICU admissions for influenza, and deaths.

Which is a pattern we’ve seen in pandemic outbreaks in the past (see Pregnancy & Flu: A Bad Combination).

The truth is, the flu virus is a far greater danger to pregnant women and their unborn child than the vaccine.

While the CDC and other public health entities continue to stress the importance of seasonal flu vaccination for pregnant women, there remains reluctance among some pregnant women to get the shot.

Vaccines are drugs, and there is no such thing as a 100% safe and 100% effective drug. Even taking over-the-counter medicines entail some risks.

But the evidence continues to show that flu vaccines are among the safest drugs available, and that most years they can provide decent protection against a serious and potentially deadly illness.

For more reassuring research on the safety profile of modern flu vaccines, you may wish to revisit the following blogs: