Last week in WHO: Urgent Action Needed On Resistant Gonorrhea, I updated a story that Maryn McKenna and I have both written about on several occasions over the past couple of years; the worrisome rise in antibiotic-resistant gonorrhea around the globe.

You’ll find a couple of my earlier offerings here, and here.

Today the ECDC has released a series of reports, including a 23-page technical document with their response plan to control and manage the threat of multidrug-resistant gonorrhea in Europe. 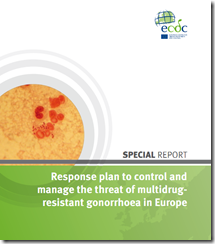 Released today as well is a 41-page document called Gonococcal antimicrobial susceptibility surveillance in Europe – 2010, that finds a worrisome trend: 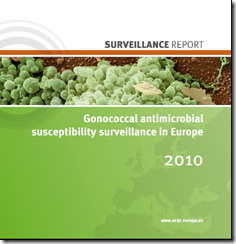 Euro-GASP 2010 identified a significant increase in the proportion of tested isolates that show decreased susceptibility to cefixime, from 4% in 2009 to 9% in 2010, using a cut-off of >0.125 mg/L. Rates of ciprofloxacin and azithromycin resistance remain high (53% and 7%, respectively).


Along with the two report, the ECDC has released their surveillance report Sexually transmitted infections in Europe 1990-2010, tracking the spread and prevalence of five STI’s (syphilis, congenital syphilis, gonorrhoea, chlamydia and lymphogranuloma  venereum (LGV)) across the EU over the past 2 decades.

With more than 32 000 cases, gonorrhoea was the second most commonly reported sexually transmitted infection (STI) in Europe in 2010. As data from the ECDC report Gonococcal antimicrobial susceptibility surveillance in Europe 2010 illustrates, gonococci have become more resistant to common agents for treatment and show reduced susceptibility to newer antibiotics. “This indicates the risk that gonorrhoea may become an untreatable disease in the near future”, stresses ECDC Director Marc Sprenger.

In response to these signals, ECDC today also publishes its Response plan to control and manage the threat of multidrug-resistant gonorrhoea in Europe.

Results from the European Gonococcal Antimicrobial Surveillance Programme (Euro-GASP)  show that the percentage of isolates with decreased susceptibility to the recommended drug for treatment of gonorrhoea (cefixime) rose from 4% in 2009 to 9% in 2010. Decreased susceptibility was detected in 17 countries in 2010, seven more than in the previous year.

“Decreasing susceptibility to recommended antimicrobials and increasing numbers of treatment failures across Europe ask for careful monitoring of the European gonococcal population as the as the loss of the current recommended treatments could result in untreatable gonorrhoea”, says ECDC Director Marc Sprenger.

The problem of antibiotic resistance isn’t restricted to Neisseria gonorrhoeae, of course. The list of resistant bacteria is long and continues to expand, including such high profile pathogens as MRSA, NDM-1, KPC, EHEC.

While the end of the antibiotic era is not yet at hand, the fear is - without new drugs and the proper stewardship of the ones we already have - we may be drawing closer to that day.

A few of my blogs on the subject include: