Over the past several days we’ve seen some confusing (and conflicting) reports on the `mystery illness’ in Cambodia which has claimed the lives of more than 50 children over the past few months (see EV71: Cambodia’s Prime Suspect).

Complicating the investigation, these children were treated by a variety of doctors in different clinics across 14 provinces, and many died and were buried before proper testing could be done.

Overnight  ProMed Mail posted (see Undiagnosed illness, fatal, child - Cambodia (06): pathogen mix) a CNN  report that a combination of pathogens – including enterovirus 71, Streptococcus suis and dengue fever – will be named responsible for these child deaths, and that the inappropriate use of steroids in their treatment exacerbated their illnesses.

An official announcement from the World Health Organization is expected shortly, but as of this writing has not yet been published.

But we do have some tweets this morning from the WHO twitter account that continue to highlight the EV71 virus as the major cause of the outbreak. 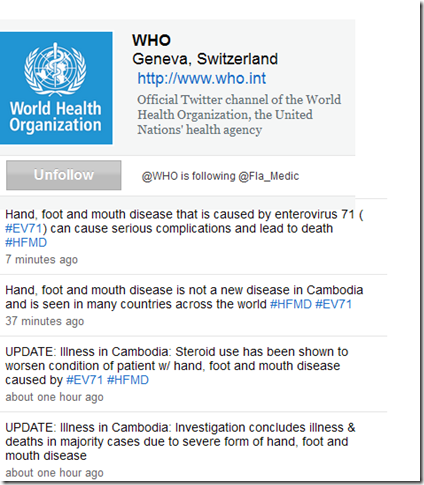 And this morning Xinhua News is reporting that:

The severe form of hand, foot and mouth disease (HFMD) was the cause of illnesses and deaths of 54 Cambodian children since April, concluded the findings of a joint investigation on Thursday.


Whatever other contributing factors might be involved, the EV71 virus is perfectly capable of producing serious – even fatal – illness on its own.

The classic symptoms of a blistering rash on the hands, feet, and mouth associated with HFMD are not always present. Sometimes the patient only presents with severe neurological symptoms.

Outbreaks of EV71 are neither new, nor rare, although the mortality rate in this Cambodian outbreak does appear unusually high (admittedly difficult to know, since we don’t know how many mild cases went uncounted).

The past decade has seen numerous outbreaks of EV71, resulting in the deaths of hundreds of children across Asia (see China: EV71 Claims 28th Victim, Authorities Warn of Possible `Mass Outbreak', FMD Outbreak In China Spreads To 25,000 Children).

We have also seen signs that the virus continues to evolve (see China: A Recombinant EV-71).


While no new cases have been reported in the past several days, with no vaccine and no effective antiviral treatment available, fears continue to run high in Cambodia. The following report from Bangkok Post indicates that some Cambodians with small children are attempting to enter Thailand to escape the outbreak.

The hand, foot and mouth disease (HFMD) scare has resulted in a mass exodus of Cambodian parents with young children into Sa Kaeo province.

The Aranyaprathet immigration checkpoint was yesterday crowded with Cambodian travellers, most of them with young children, eager to enter Thailand.

The Cambodian parents were mainly workers and vendors at the Rong Kleau border market in Thailand.

When we get an official announcement from the WHO, or the CDC, as to the cause of these deaths, I’ll post it.  For now, however, the EV71 virus still appears to be the prime suspect in this outbreak.

Posted by Michael Coston at 9:11 AM