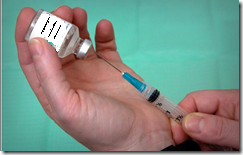 Roughly two years ago GSK’s adjuvanted Pandemrix vaccine was associated with a perceived increase in narcolepsy among children and adolescents in Finland and Sweden (Note: Adjuvanted flu vaccines, like Pandemrix, were not used in the United States).

Despite some conflicting and incomplete data the European Medicines Agency issued a statement in July of 2011 recommending:

In persons under 20 years of age Pandemrix to be used only in the absence of seasonal trivalent influenza vaccines, following link to very rare cases of narcolepsy in young people.

Finland also convened a Narcolepsy Task Force (see Finland: Task Force Report On Pandemrix-Narcolepsy Link) that confirmed an association – as yet unexplained – between receipt of the vaccine and an increase in narcolepsy in children between the ages of 4 and 19.

Somewhat surprisingly, this increase in narcolepsy was not reported in many other countries where the Pandemrix vaccine was used, leading researchers to wonder what other factors might have contributed to this effect.

All of which serves as prelude to a new technical report released today from the ECDC that summarizes the results from two epidemiological investigations into the phenomenon.

The 164 page technical report below is highly technical, data-rich, and fairly daunting for non-scientists. 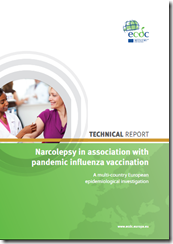 Luckily, the ECDC has also produced a 2-page summary.

Available as PDF in the following languages:

This document is free of charge.

This report summarises the results from two epidemiological studies to investigate a possible association between an unexpected increase in narcolepsy cases following the use of the influenza A(H1N1)pdm09 vaccines. The studies were conducted by the Vaccine Adverse Event Surveillance and Communication (VAESCO) Consortium under the auspices of ECDC and undertaken in Denmark, Finland, France, Italy, the Netherlands, Norway, Sweden and the United Kingdom.

The MAIN CONCLUSIONS FROM THE REPORT (lifted from the brief above) reads:

The case–control study confirms an association between vaccination with Pandemrix® and an increased risk of narcolepsy in children and adolescents (5 to 19 years of age) in Sweden and Finland that originally reported on this issue (signalling countries). No such association was found in adults in these two countries.

According to the strictest primary analysis, the kind of assessment designed to avoid most biases like media and diagnostic awareness biases, no significant risk was found in children and adolescents in other countries included in the study – Denmark, Italy, France, the Netherlands, Norway and the United Kingdom (non-signalling countries).

However, sensitivity analyses that assess the robustness of the results from the primary analysis, have highlighted the importance of several time-related factors that affect the strength of association between influenza pandemic vaccines and narcolepsy. An example of a time-related factor shown to influence results is the length of the chosen study period, that is, the inclusion of cases occurring before and after the period of media attention would give a different outcome.

One such sensitivity analysis was based on the date of onset of excessive day-time sleepiness before media attention. This identified an increased risk for narcolepsy for children and adolescents following influenza A(H1N1)pdm09 vaccination in both signalling and non-signalling countries.

A similar sensitivity analysis also addressed date of onset of excessive daytime sleepiness and showed an association in adults in non-signalling countries before awareness increased.

To further inform the regulatory actions and the public, the report recommends increasing the statistical power by ensuring completeness of the case–control study through an exhaustive case inclusion in all age groups in the primary study period before increased awareness.

While the Pandemrix vaccine is linked to an increase in narcolepsy among children in Sweden and Finland, we still don’t know why.

Or why the same effect wasn’t observed everywhere the Pandemrix vaccine was used.

From the main report, this analysis.

The observations are sufficiently strong and consistent for children in the signalling countries using different methodologies to warrant further investigations as to a possible mechanism.

While it is the case that the vaccine concerned is one with a novel adjuvant there is a confounding factor in Europe in that this was the only vaccine offered for children in any volume in Europe. Hence it cannot be concluded that the adjuvant is the cause of the observation.

Equally there is also the possibility that it is the combination of vaccination and influenza transmission or another unrecognised infection or environmental factor in individuals with
developing nervous systems.

There will be a role also for animal models and mechanistic studies.


The cause of this Pandemrix-Narcolepsy link remains a medical mystery, and as these reports indicate, it will take more research to fully unravel this story.

Posted by Michael Coston at 9:53 AM 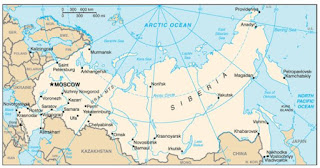