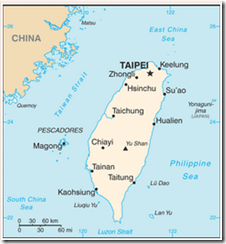 Not unexpectedly, we now have the first confirmation of an H7N9 case hospitalized outside of the Chinese Mainland, as announced this morning by Taiwan’s Centers For Disease Control.

The patient is a 53 year-old man who returned to Taiwan from Jiangsu Province earlier in the month, and who was hospitalized on April 16th. He is listed in critical condition.

Interestingly, this patient is a hepatitis B carrier (a virus which is endemic in Asia), and that has been mentioned before (see Crofsblog H7N9: Is Hep B an unindicted co-conspirator?) as a possible contributor to the severity of this infection.


As you’ll see, this patient tested negative for the virus twice before a positive lab result was finally obtained.  We’ve seen similar difficulties in test sensitivity with the H5N1 virus.

Additionally, three HCWs who were in contact with this patient have developed upper respiratory symptoms, have received “Self-Health Management Advice for H7N9 Influenza” instructions, and will be followed up closely by health authorities.

We’ve got the official statement (h/t Ronan Kelly on FluTrackers)  from Taiwan’s CDC:

In the late afternoon of April 24, 2013, the Central Epidemic Command Center (CECC) confirmed the first imported case of H7N9 avian influenza in a 53-year-old male Taiwanese citizen who worked in Suzhou, Jiangsu Province, China prior to illness onset.  He developed his illness three days after returning to Taiwan.  Infection with avian influenza A (H7N9) was confirmed on April 24, 2013.  The patient is currently in a severe condition and being treated in a negative-pressure isolation room.

Minister of Health, Dr. Wen-Ta Chiu, and Commander of CECC, Dr. Feng-Yee Chang, have full knowledge of the situation and have instructed implementation of subsequent prevention and control measures.  In addition, CECC has reported the case to the World Health Organization through the IHR Focal Point.  Furthermore, according to the Cross-strait Cooperation Agreement on Medicine and Public Health Affairs, CECC has also reported the case to the contact point in China.

CECC indicated that the case is a hepatitis B carrier with history of hypertension.  Due to the fact that he worked in Suzhou, Jiangsu Province before his illness, he had been traveling back and forth regularly between Suzhou and Taiwan for a long time.  During March 28 and April 9, 2013, the patient traveled to Suzhou.  On April 9, he returned to Taiwan from Shanghai.

According to the case, he had not been exposed to birds and poultry during his stay in Suzhou and had not consumed undercooked poultry or eggs.  On April 12, he developed fever, sweating, and fatigue, but no respiratory or gastrointestinal symptoms.  On April 16, he sought medical attention at a clinic when he developed high fever and was transferred to a hospital by the physician.

He was then hospitalized in a single-patient room for further treatment. On April 16, he was administered Tamiflu.  On April 18, his chest x-ray showed interstitial infiltrate in the right lower lung.  On the night of April 19, his conditions worsened.  On April 20, he was transferred to a medical center for further treatment. He was then intubated due to respiratory failure and placed in the negative-pressure isolation room in the intensive care unit. During his stay in the hospitals, two throat swab specimens were collected and both tested negative for avian influenza A (H7N9) virus by real-time RT-PCR.  On April 22, the medical center collected a sputum specimen from the patient and the specimen was tested positive for influenza A.  In the morning of April 24, avian influenza A (H7N9) virus was detected in the sputum specimen using real-time RT-PCR.  In the later afternoon of April 24, the National Influenza Center in Taiwan confirmed the identification and completed the genome sequencing of the virus.

Only three contacts failed to put on appropriate personal protective equipment when the contact occurred.  Thus far, the three have not developed symptoms, but they will be followed up until April 27, 2013.  On the other hand, while delivering healthcare services, three healthcare workers who were geared with appropriate personal protective equipment developed symptoms of upper respiratory infection.  The public health authority have conducted thorough health education activities for all contacts, issued them with “Self-Health Management Advice for H7N9 Influenza”, and will be following up with them closely until the period of voluntary contact tracing is lifted.  When a contact develops influenza-like illness symptoms such as fever and cough, the public health authority will voluntarily assist the individual in seeking medical attention.

CECC has continued to strengthen surveillance and fever screening of travelers arriving from China, especially areas with ongoing outbreaks of human infection with avian influenza A(H7N9), including Shanghai, Jiangsu, Zhejiang, Anhui, Beijing, Henan and Shandong.  Physicians are once again reminded to report suspected cases to the health authority within 24 hours of detection according to the relevant regulation.  Before the infection is confirmed, please manage the case according to the following: a suspect case-patient with severe respiratory infections should be hospitalized in isolation for treatment. A suspect case-patient with mild symptoms should be asked to conduct self-health management and put on a surgical mask, and provided with thorough health education.  Further, specimens should be collected from the patient for laboratory testing and the need for administering antivirals should be determined.  If human infection with avian influenza A (H7N9) is later confirmed, an appropriate hospital for isolation and treatment will be determined by the Regional Commander of CECC.

CECC once again urges travelers visiting China to practice good personal hygiene such as washing hands frequently and putting on a mask, take preventive measures such as avoiding direct contact with poultry and birds or their droppings, avoiding visiting traditional markets with live poultry, consuming only thoroughly cooked poultry and eggs.  If symptoms such as fever and cough develop after returning to Taiwan, please put on a surgical mask and seek immediate medical attention.  Moreover, please inform the physician of the recent travel history to facilitate diagnosis and treatment. For more information, please call the toll-free Communicable Disease Reporting and Care Hotline, 1922, or 0800-001922 if calling from a cell phone, or visit the Taiwan CDC’s website at http://www.cdc.gov.tw.